By Life Ribermine August 8, 2020 No Comments

Several members of the LIFE RIBERMINE project team, including the coordination, representatives of all partners and the European Union monitor, carried out on March 6th, a field trip to the different scenarios of the project intervention in Alto Tejo, Spain. Members of the “Parque Natural del Alto Tajo” and the Municipality of Peñalén were also present.
Relevant aspects concernig the mining restoration scheduled, were explained and discussed, namely the information available prior to the interventions, the objectives and the performance conditions.

The field trip went as planned, starting in Peñalén. First, the group visited the Escombrera Hoya Grande followed by the Santa Engrácia mine, in front of Poveda de la Sierra track, and then, the mouth of the Merdero stream on the Tagus river. There, exists a sediment and hydrological correction dyke, due to the large amount of erosioned material coming from the upper part of the Tagus river basin. Finally, the pilot projects with geomorphological restoration according to the GeoFluvTM method, from the the mines El Machorro and Nuria, were also visited, already in Poveda de la Sierra.
During the fieldwork, it was possible to capture several images and shoot some of the locations visited, which will be used on the website and social networks throughout the project.
The visit was a success, despite the cold and extreme weather, since all the beneficiaries and the EU monitor could exchange ideas and get to know better the reality of some of the scenarios of intervention of the LIFE RIBERMINE. 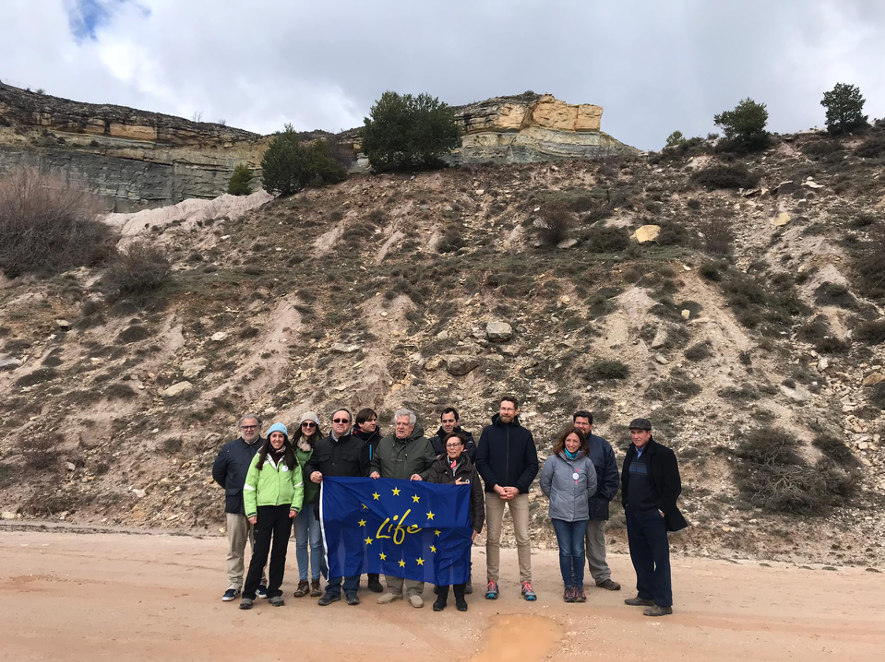 Photos of the field visit, during the first follow-up meeting with the external monitor of NEEMO-EASME.