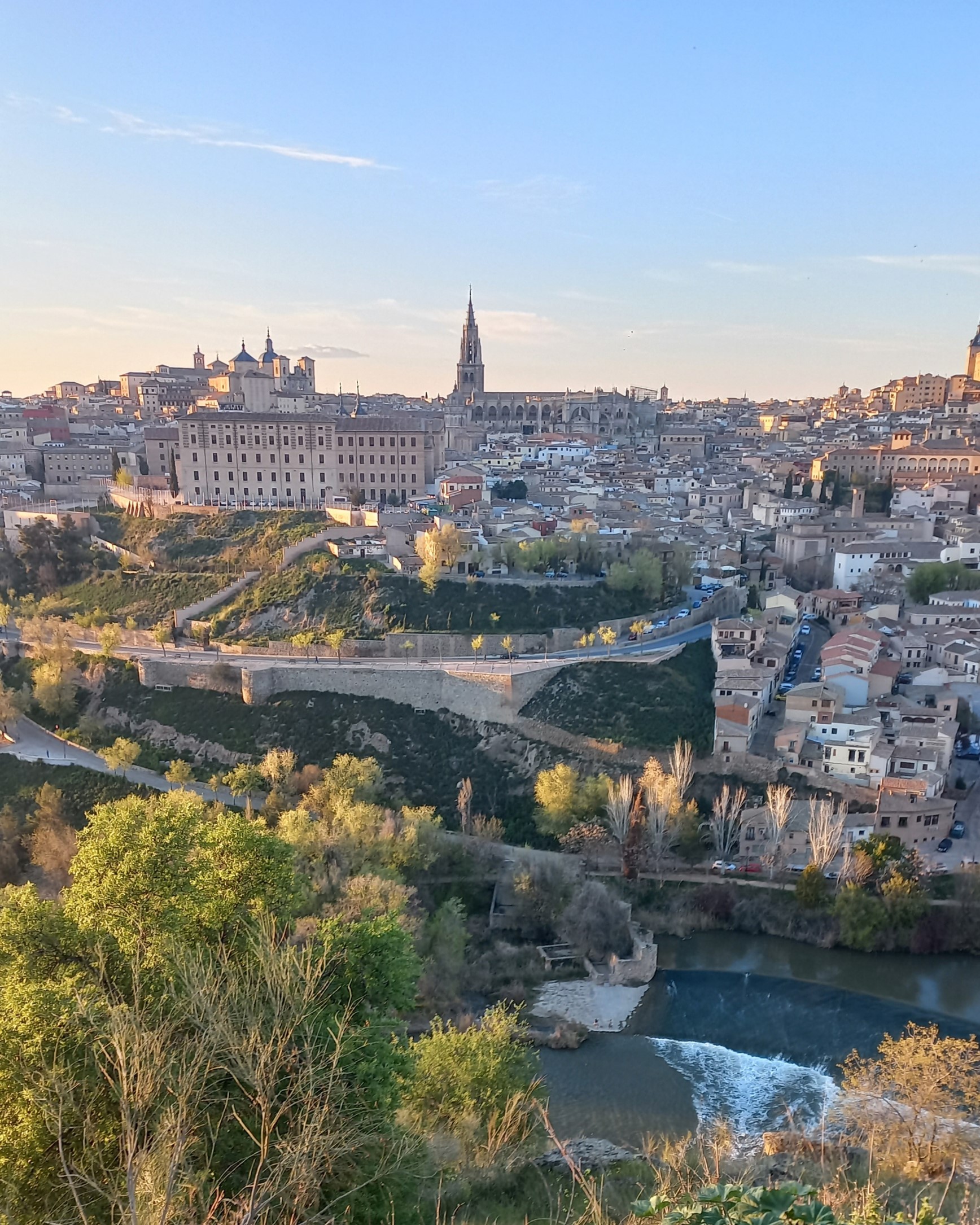 “Technical Conference and Workshop – LIFE RIBERMINE” with more than 80 participants!

The coordination (Minas JCCM – Castilla La Mancha Gov.), together with the partners of the project (CAOBAR, CCVLousal , GEACAM and UCM), organized the “Technical Conference and Workshop – LIFE RIBERMINE”, which took place on the 6th of April 2022, at the School of Regional Administration, in Toledo (Spain). The main objective of this event was the exhibition of the applied techniques and the sharing of some of the results obtained so far, in the areas of intervention of the project in Spain and Portugal. It was addressed to all those interested in these themes, with particular emphasis on the beneficiaries of the project, but also to a differentiated public, technical and student, such as members of local and regional administrations, professionals in the mining sector, and teachers and students from various scientific areas.

The Technical Journey took place at the School of Regional Administration, in the monumental city of Toledo (a UNESCO World Heritage Site, since 1986), surrounded by the Tagus River. The main area of intervention of the Life Ribermine Project is located upstream (in Peñalén), close to the source of this River (Serra de Albarracín).

Under the motto “A new comprehensive, modern and ecological approach to mining restoration”, the actions of ecological restoration with a geomorphological basis, with a view to improving the quality of soils and waters and the conservation of biodiversity, which guide the LIFE RIBERMINE project, were explained. 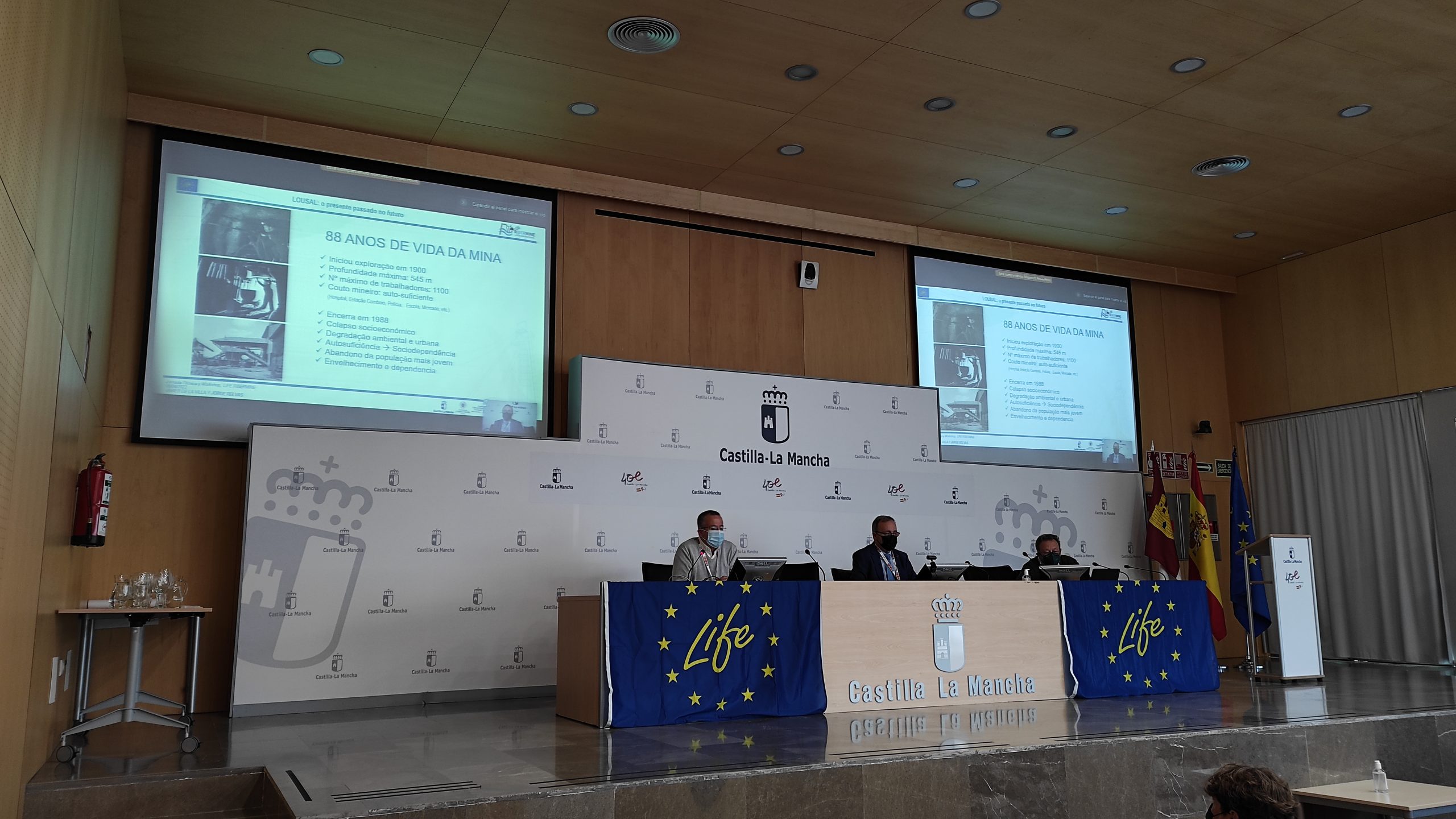 This Journey, which was also broadcast online, had more than 80 participants, and included, in the morning, a cycle of lectures with about 20 speakers, followed by a Round Table, and, a Workshop during the afternoon. After the reception of the participants, the Project Coordinator, Javier de La Villa Albares (Minas JCCM), together with Manuel Guirao Ibáñez, General Director of Energy Transition of Castilla La Mancha Gov., opened the works, followed by the presentation of the Project by the Coordinator and by Jorge Relvas, President of CCVLousal (Portugal) representing the only international partner of the Project. 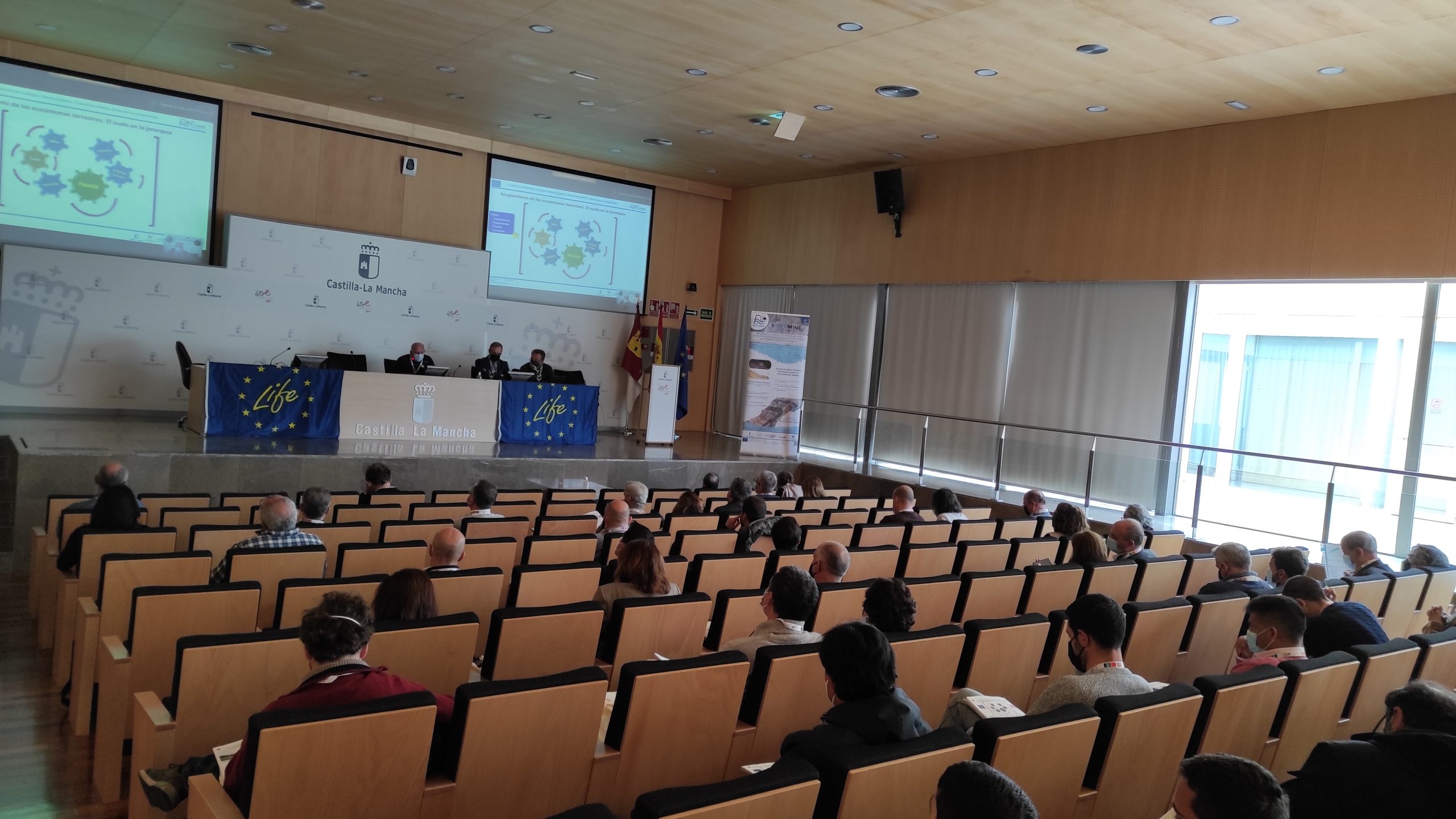 Face-to-face audience. About 80 people participated in these Conferences (in person and online). The communications were divided into two blocks, in which participated more than 20 speakers, Spanish and Portuguese, including representatives of all project partners, and experts from various scientific fiels. In the photo, in the center, Avelino Garcia, Prof. Emeritus of the Complutense University of Madrid.

The communications were divided into two blocks, namely “Previous studies, methodologies and biotic environment” and “Execution, monitoring, biotic environment and communication” followed by the debate “The restoration of mining spaces: new challenges, new language”, moderated by Beltrán de Ceballos (President of Cinclus Soluciones), and in which, several pertinent questions were debated by the participants and speakers. The series of lectures was closed by Jose Luis Escudero, Councilor for Sustainable Development of Castilla La Mancha Gov. After the lunch break, the workshop “Ecosystem services in restoration: intervention strategies and design criteria” followed. 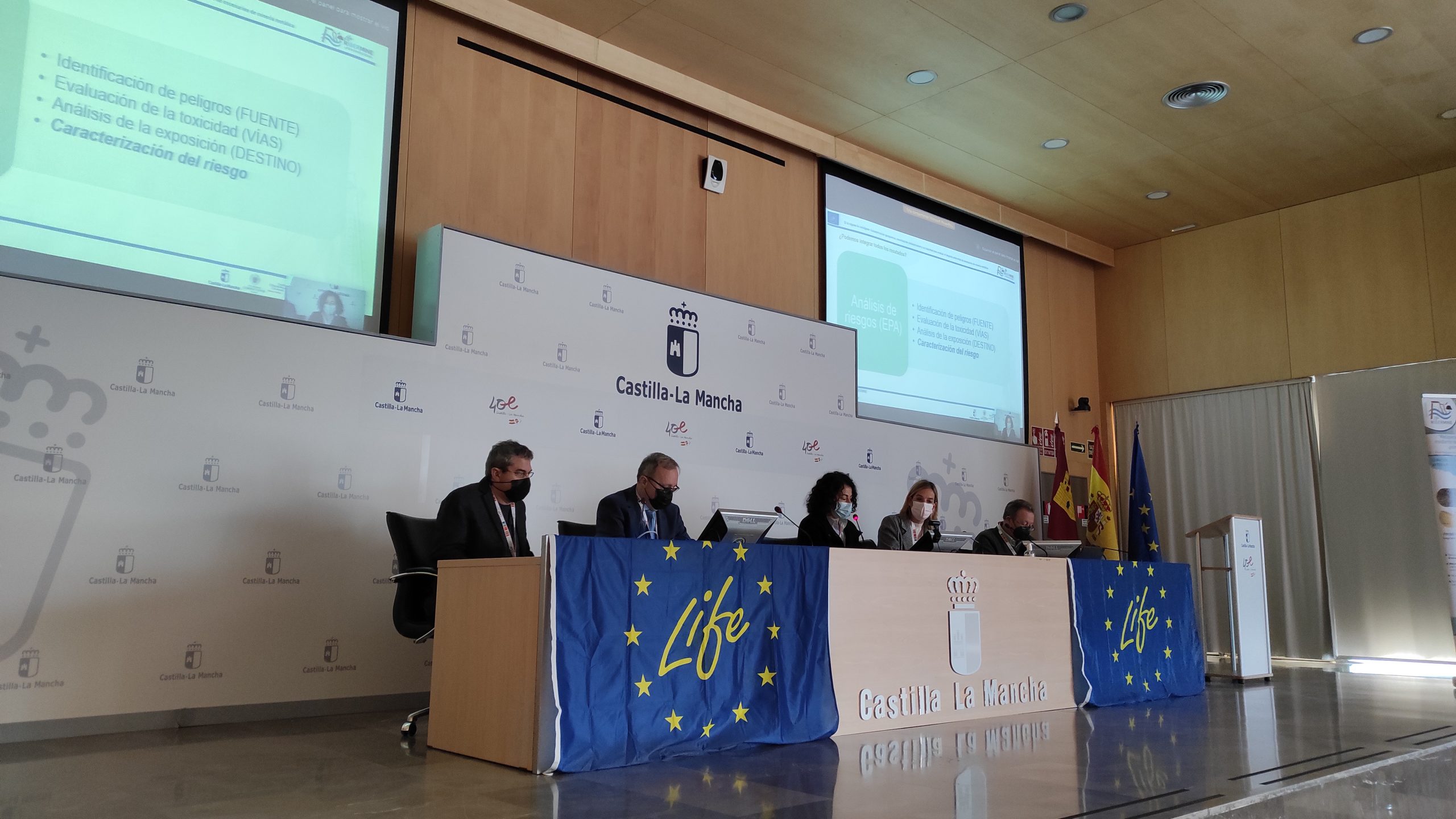 Throughout the duration of the project (until March 2014) and in the 5-year After-Life period that will follow, other similar events are planned.
This Journey, in addition to being the first moment in which, in an integrated way, the practical results that the project has already achieved since its beginning at the end of 2019 (some of which positively surpassing what would be expected) were shared, was very well received by all participants, reflecting the originality and relevance of the LIFE RIBERMINE project, the fulfillment of the proposed goals and the high quality of the work carried out and in progress.
The communications presented in the conference cycle can be downloaded at: https://liferibermine.com/en/documents/ 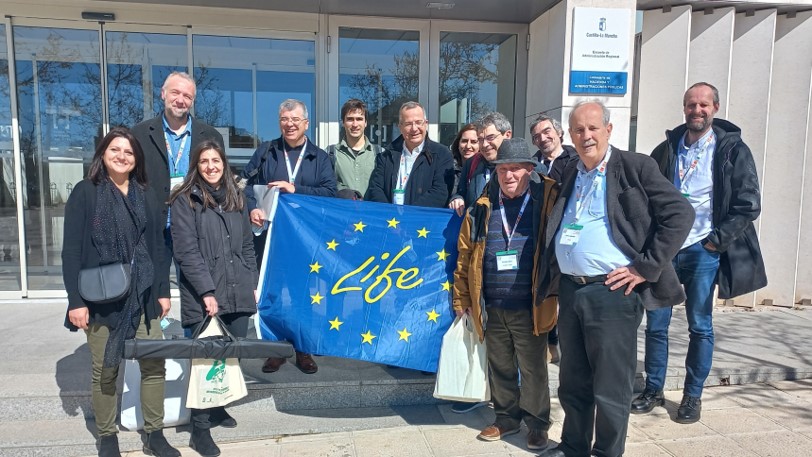 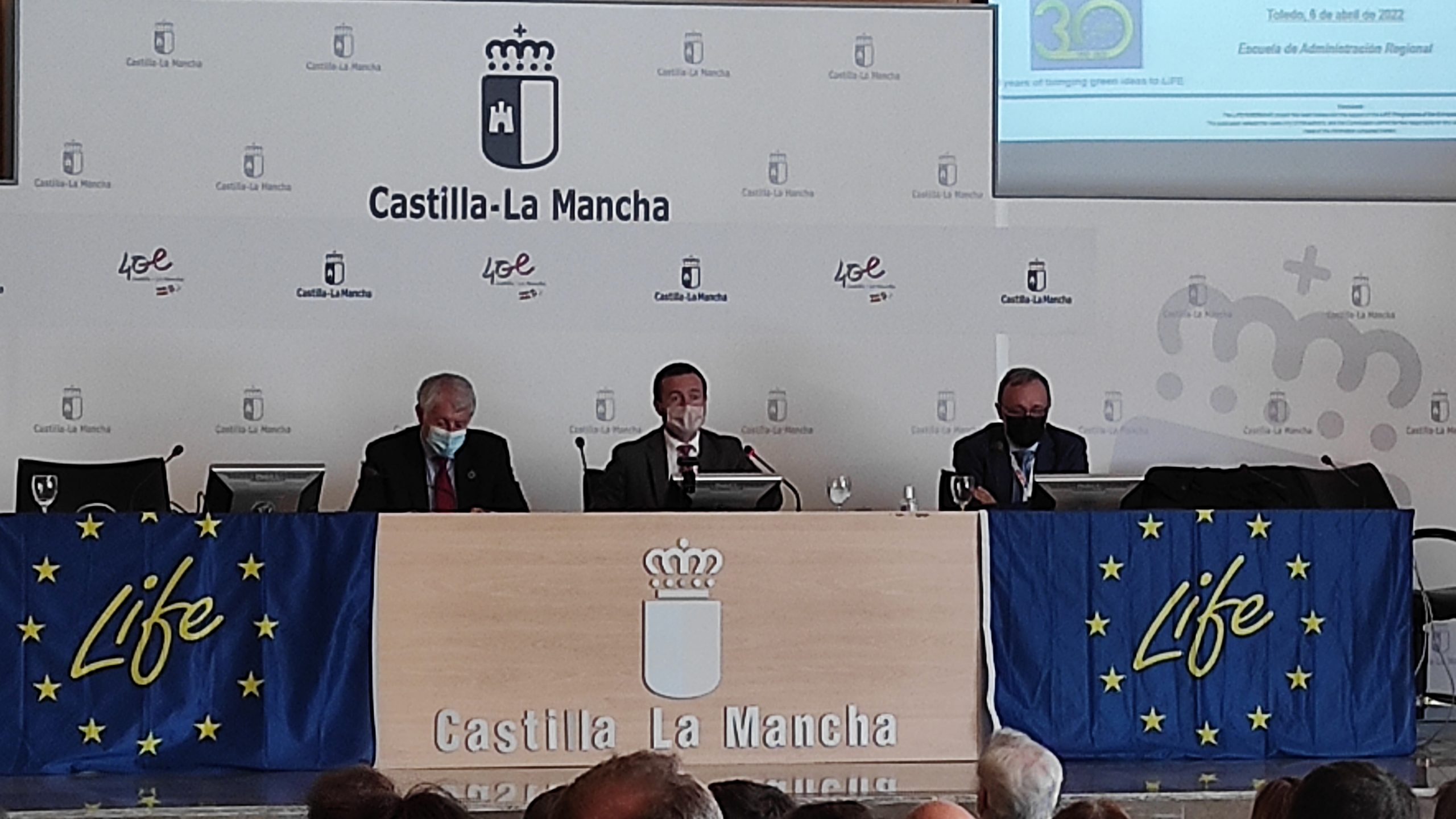 The morning of Journey, ended with a speech by José Luis Escudero, Councilor of Sustainable Development of the Castilla-La Mancha Government (in the centre), which highlighted the importance of the LIFE RIBERMINE Project, accompanied by Manuel Guirao Ibáñez, General Director of the Energy Transition of the Government of Castilla-La Mancha (in the left), and, by the Life Ribermine Project Coordinator, Javier de La Villa Albares (in the right).