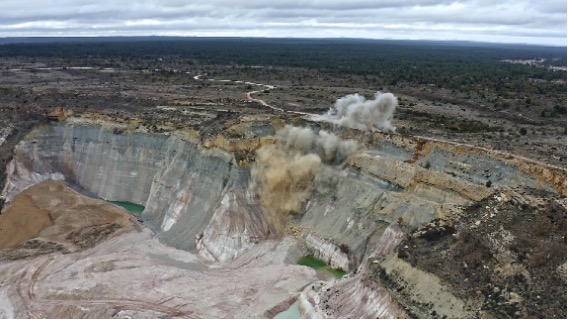 Construction of the ROYAL® Slope in the front of the Santa Engracia mine in progress! – December 22nd 2021

LIFE RIBERMINE started the construction of the Talud Royal® (Royal Slope®) in the front of the Santa Engracia mine, on December 22nd, 2021. The Royal Slope® is a technique that consists of replicating natural forms of vertical slopes on road slopes or mining slopes, in order to stabilize the active fronts, and visually and ecologically integrate them into the surrounding environment.
As part of LIFE RIBERMINE, Royal Slope® is being applied in mining, at the Santa Engracia mine, for the first time outside France. In fact, the LIFE RIBERMINE project is the first project in the world that combines the Royal Slope® and the GeoFluv-Natural RegradeTM techniques.
The implementation of the Royal Slope® methodology followed the guidelines of its creator, Paul Royal. The execution of the first phase of the Royal Slope® consisted of carrying out small controlled detonations, designed following the natural fracture planes of the rocks, in order to cause a detachment and stabilize the front.

The company in charge of the procedure was Geomex S.L., always following the provisions of the Detonation Plan (plan de voladuras) prepared by the LIFE RIBERMINE team, and processed and authorized in accordance with the provisions of mining regulations. The technician responsible for executing the project was Lázaro Sánchez Castillo, who works at CAOBAR (a partner in the project).
The completion of the second phase is scheduled for the summer of 2022.