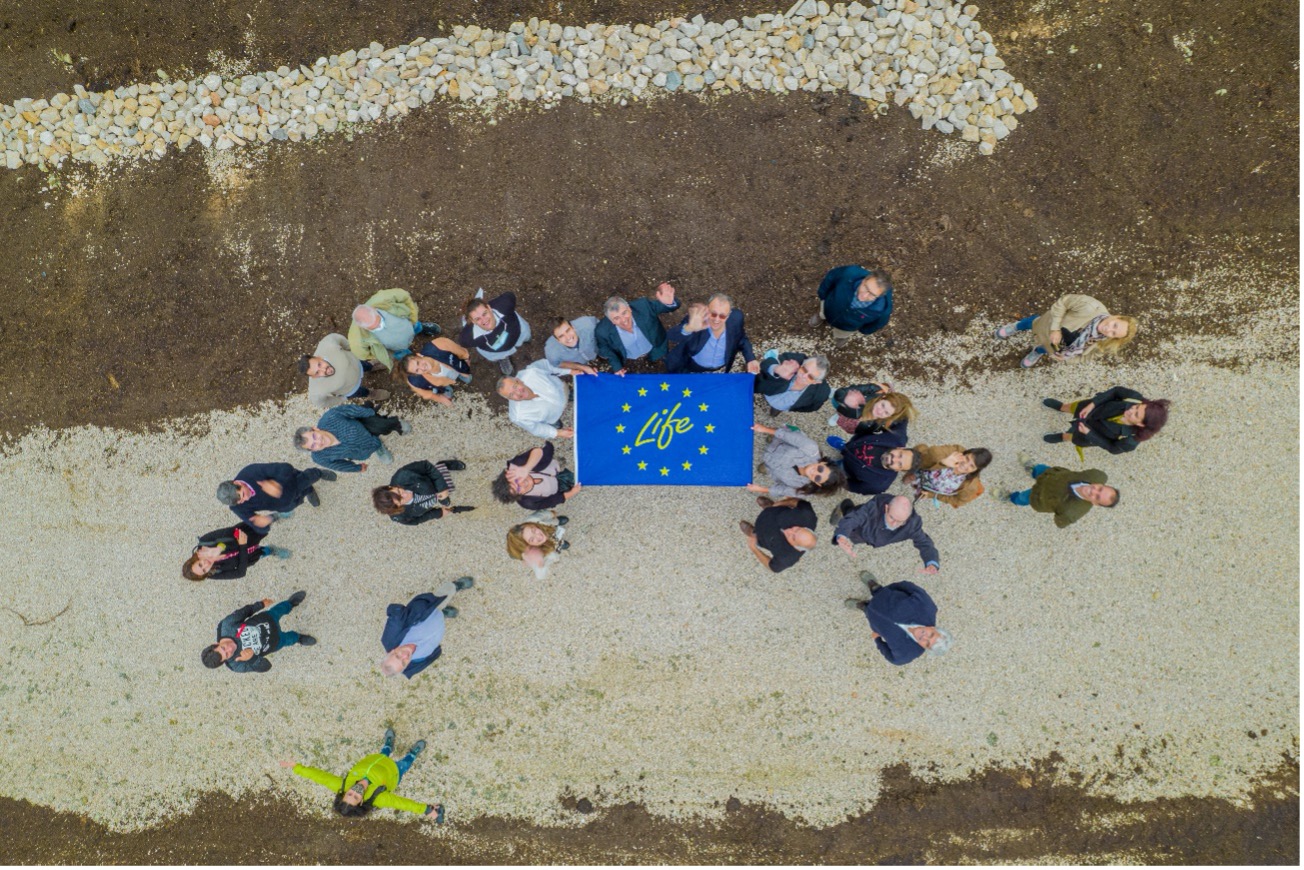 The “Mina de Ciência – Centro Ciência Viva do Lousal (CCVLousal)” promoted, on October 29th, the public presentation in Portugal of the LIFE RIBERMINE Project, with special emphasis on the implementation of the “Lousal Restoration Plan”, in this former mine in the municipality of Grândola.
With practical, experimental and demonstrative purposes of the Best Available Techniques (BAT) of mining restoration, the multidisciplinary work carried out in this pilot area (Lousal Pilot Project, PPLousal), took place between the last fortnight of September and the first week of November, having completed, in record time, all phases planned. This allowed all participants to observe the intervention area during the public presentation of the Project, as well as participating emblematically in the final task, the sowing of native species in the region, intended for the revegetation of the re-qualified space (see more detailed description of the works at https://liferibermine.com/en/2021/10/26/lousal-pilot-project-in-full-development/).
Given the importance and pioneering character of the PPLousal, several relevant entities, public and private, linked to its implementation, mining, environment, science, education and tourism, as well as other participants, particularly interested in these themes, were invited and attended.
Of course, in addition to the beneficiaries of LIFE RIBERMINE, the President and Vice-President of the Municipality of Grândola, as well as representatives of other Municipalities in the region, namely Sines and Aljustrel, were present. 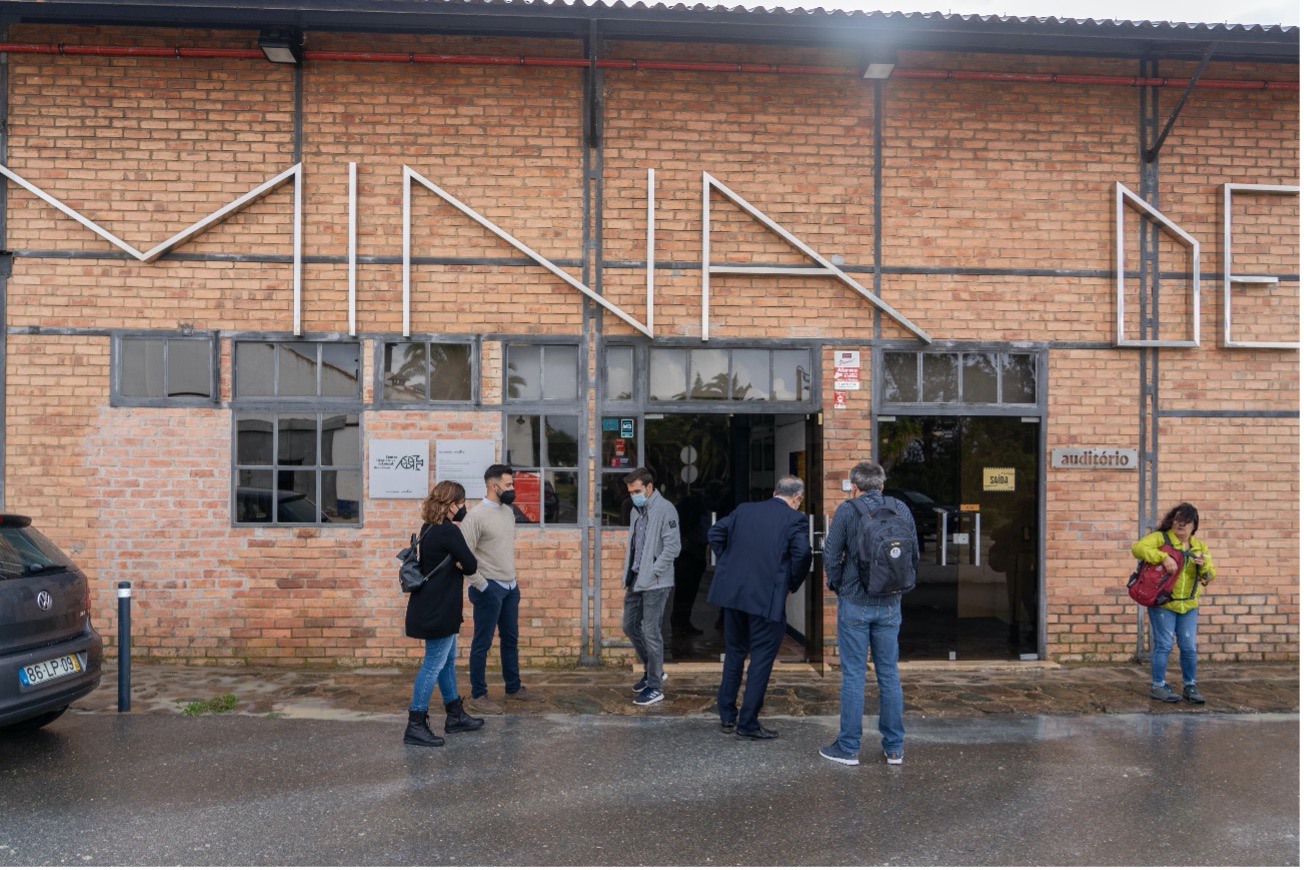 Arrival at the “Mine of Science”. Photo: @BrunoGonçalves 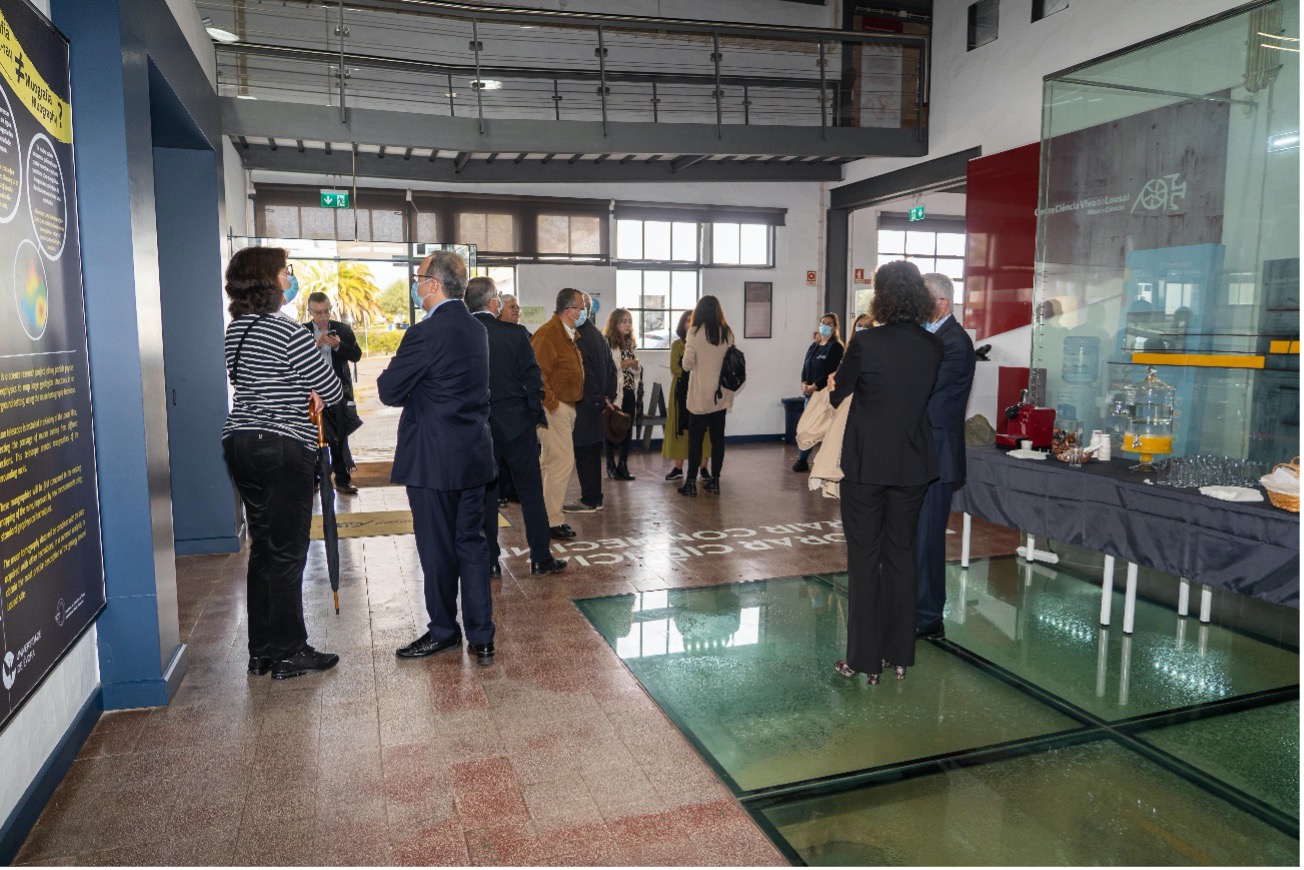 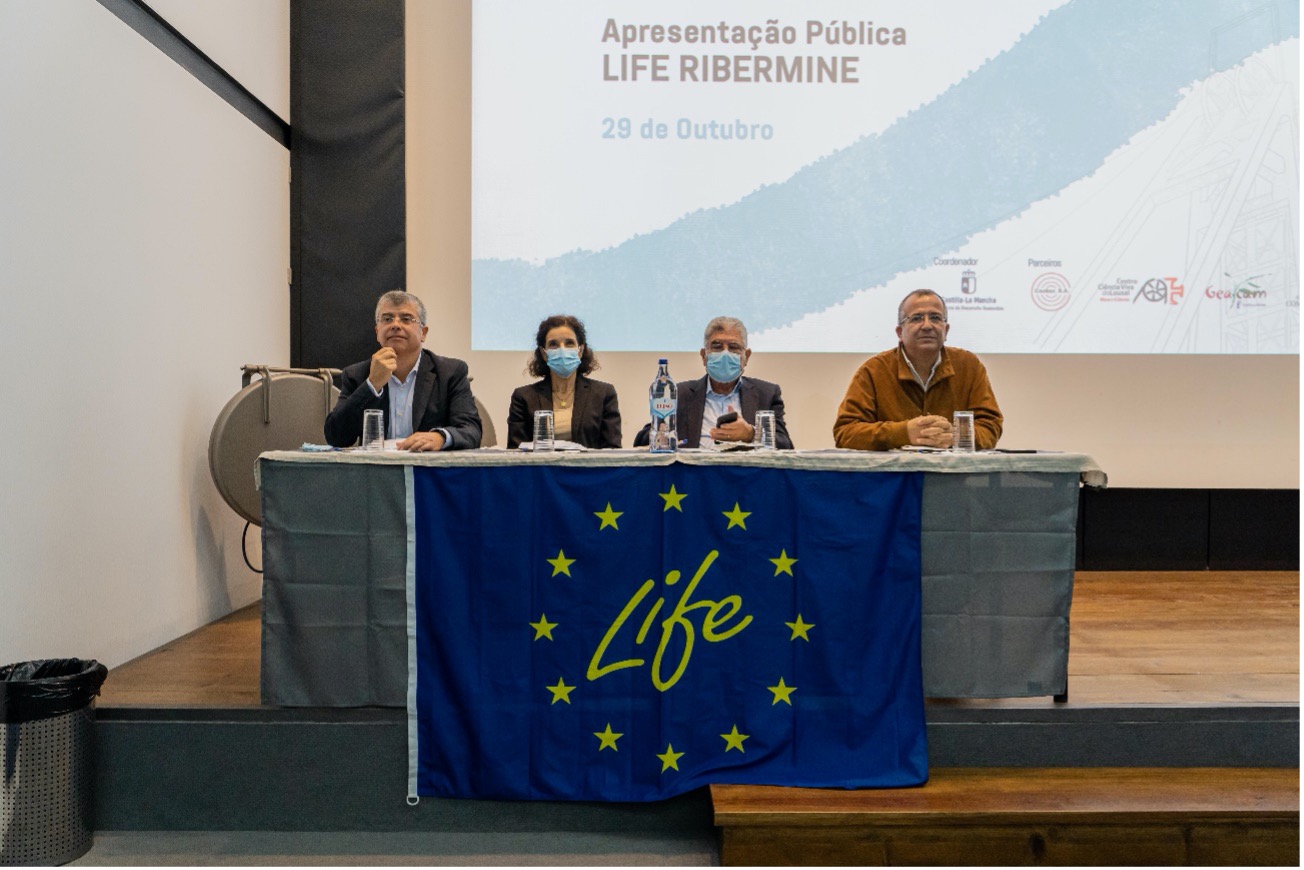 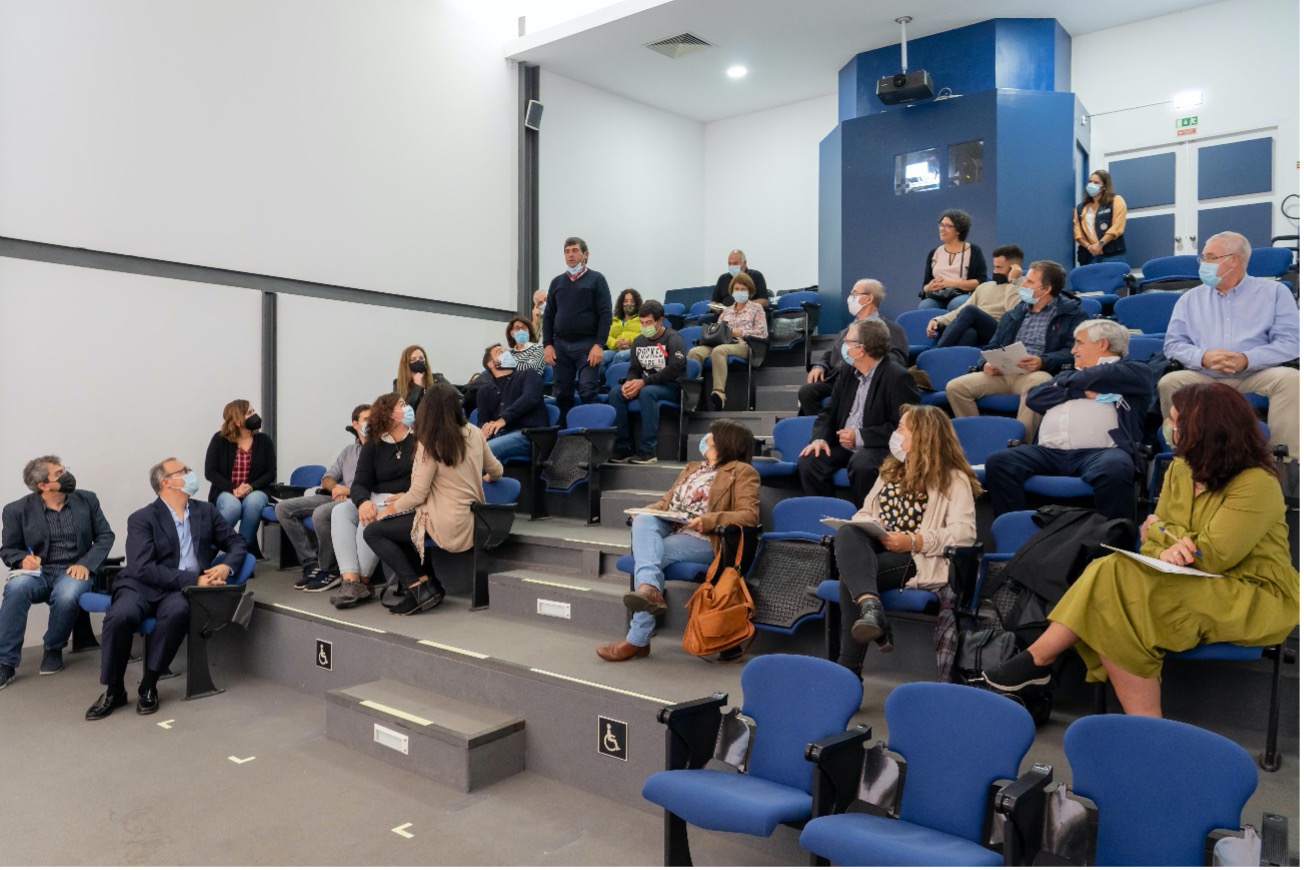 Individual presentations of the participants to the audience. Photo: @BrunoGonçalves

Representatives of companies involved in the recovery of degraded mining areas (e.g. “Constrotúnel – Construções, Projecto e Serviços, SA”) and prominent representatives of the companies “SOMINCOR, Sociedade Mineira de Neves-Corvo” and “Beralt Tin and Wolfram Portugal”, concessionaires of two of the three active mines in Portugal for metallic resources, namely Neves-Corvo and Panasqueira, were there too. Also represented, were some of the firms that supplied raw materials (e.g. “Agregados Calcários das Sesmarias, Lda”), machinery and personnel (e.g. “José Francisco da Silva Carrinhos – Rental of Agricultural and Industrial Machines” and “Custódio Rodrigues Gonçalves – Silvicultura e Forestry Exploitation”), essential for carrying out the physical intervention in Lousal. Researchers from several Universities (e.g. University of Lisbon, Universidad Complutense de Madrid (UCM) and Universidad de Castilla-La Mancha), professors in scientific areas of regular education, participants in previous actions promoted by LIFE RIBERMINE at CCVLousal (e.g. “Ciência Viva no” Verão” and “Noite dos Investigadores”) and tourist agents (e.g. “Rural Tourism Refúgio das Origens”, Website “AlentejoTurismo.pt”) also made a point of being present, giving expression to the enormous educational and tourist attraction potential contained in this Project.
After welcoming the participants at CCVLousal, the journey began in an auditorium, hosted by Jorge Relvas, president of the Associação Centro Ciência Viva do Lousal, who invited all to present themselves individually. The president of the Municipality of Grândola, Figueira Mendes, highlighted the importance of CCVLousal, and, in particular, its partnership in the LIFE RIBERMINE Project, with a view to enhancing, preserving and disseminating the mining legacy of Lousal.
The oral presentations began with the general coordinator of Project LIFE RIBERMINE, Javier de la Villa Albares, Head of the Mining Service of the General Directorate of Energy Transition of the Sustainable Development Council of the Regional Government of Castilla-La Mancha (Spain), which explained the general features of the Project. After this generic introduction, UCM and CCVLousal members focused on the more specific theme of “Combining Geomorphological Restoration with Chemical Stabilization Techniques in the Lousal Region – A Pioneering Initiative in Europe”.
José Francisco Duque, from UCM, explained the bases for the “Geomorphological Restoration of Mining Areas” carried out in this project, and his doctoral student, Ramón Sánchez, spoke on the “Combination of Geomorphological Restoration and Chemical Stabilization in Lousal”. Remember that one of the main objectives of PPLousal is to minimize the effects of Acid Mining Drainage (AMD) caused by tens of years of metallic pyrite mining, which affects the quality of soil and water, with negative impacts on the natural ecosystems and beings living in the region. This is, as is well known, an environmentally complex task that requires innovative, holistic and transdisciplinary approaches. Mónica Martins (CCVLousal) detailed the “Lousal Pilot Project”, in a presentation entitled “The Work” – main phases and works developed”, in which she reflected on the stages passed, the main difficulties and constraints associated with the course of the intervention, the form how they were being surpassed and the apprehendings resulting from it. Ana Margarida Pereira (CCVLousal) focused on “Communication and General Dissemination of the Project”, an area of great relevance in the “LIFE Ambiente” projects supported by the European Union, which, in the case of the LIFE RIBERMINE Project, is mainly promoted by CCVLousal. Álvaro Pinto, executive director of CCVLousal, concluded the morning sessions, reaffirming the “Strategic Relevance and Importance of the Development of this Project in Lousal”. All oral communications are available at https://liferibermine.com/en/documents/. 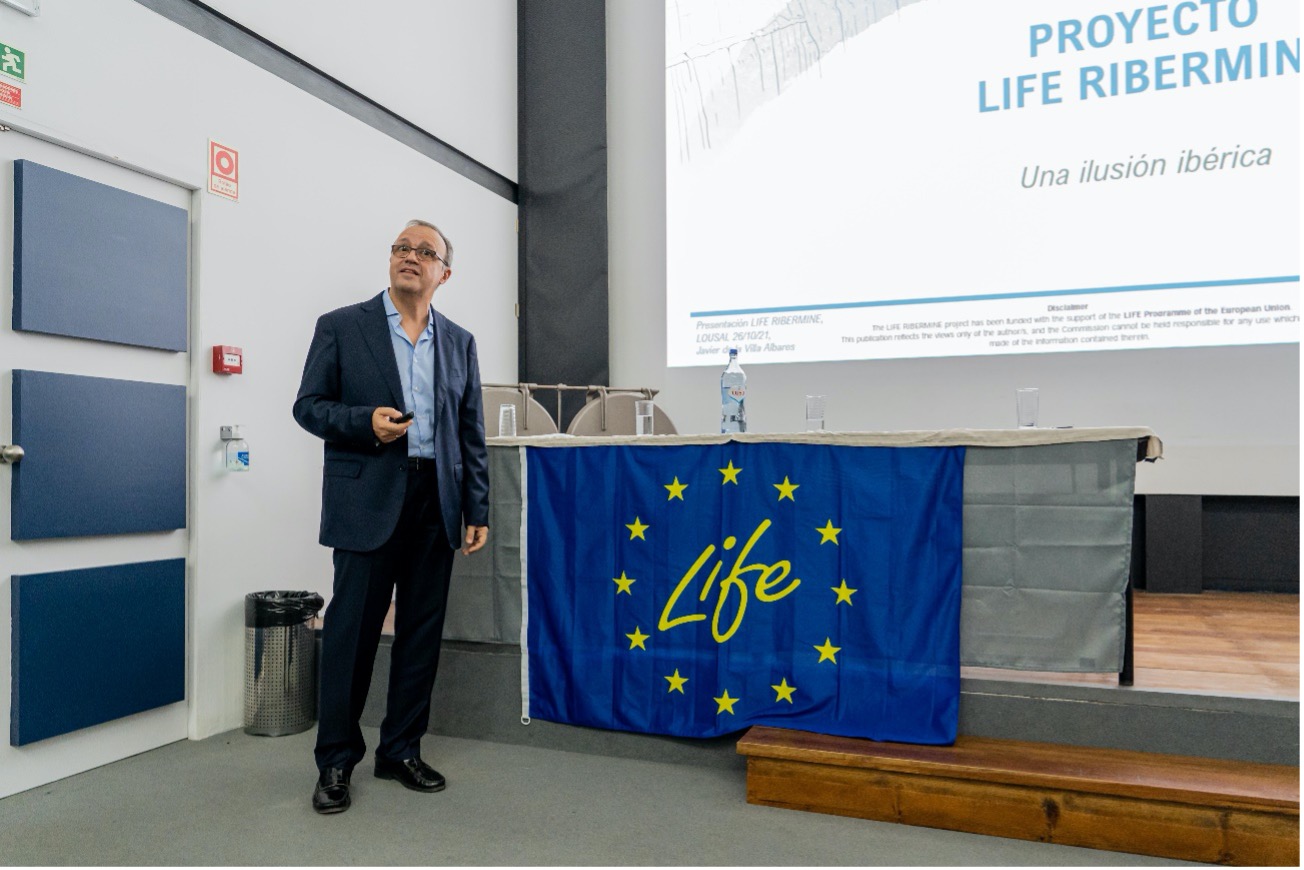 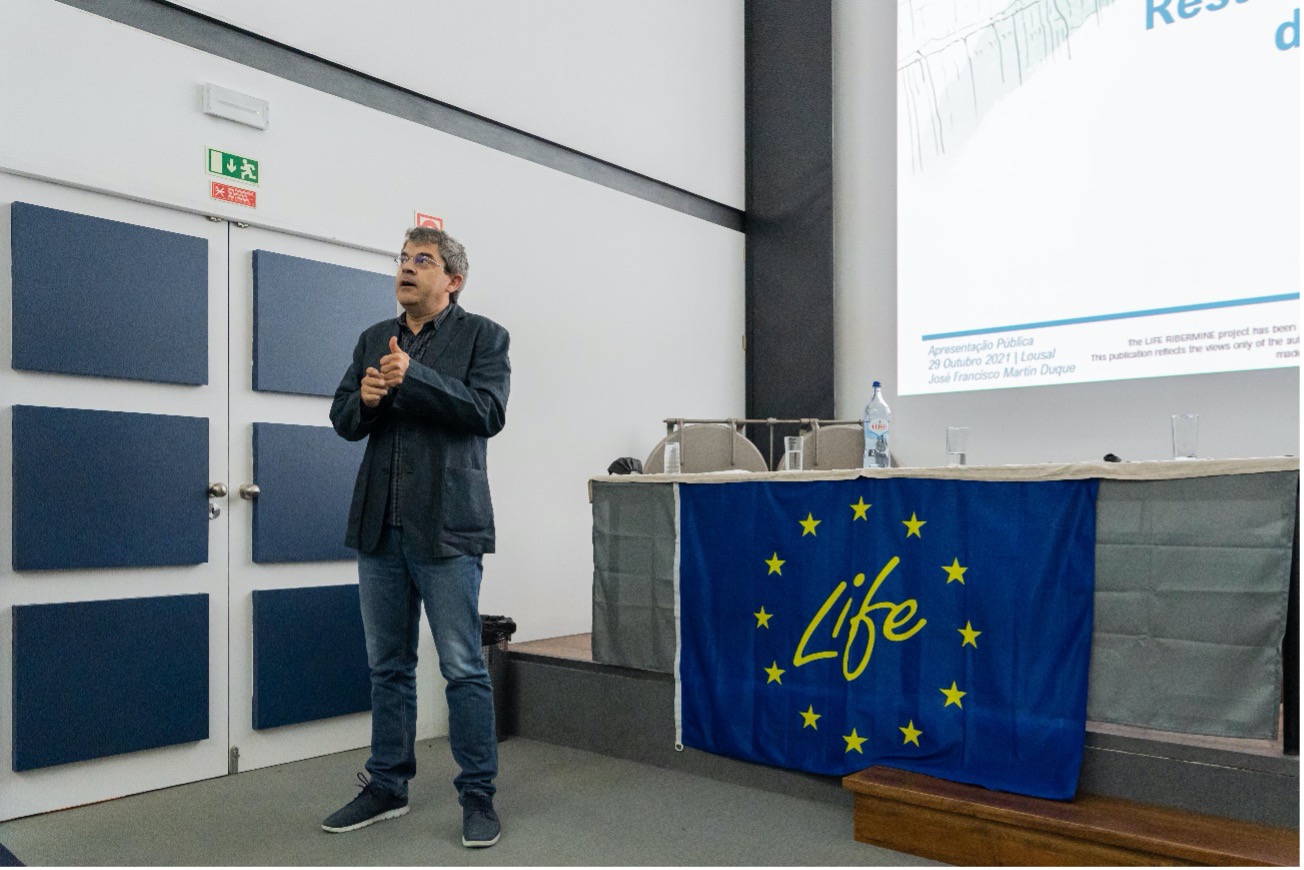 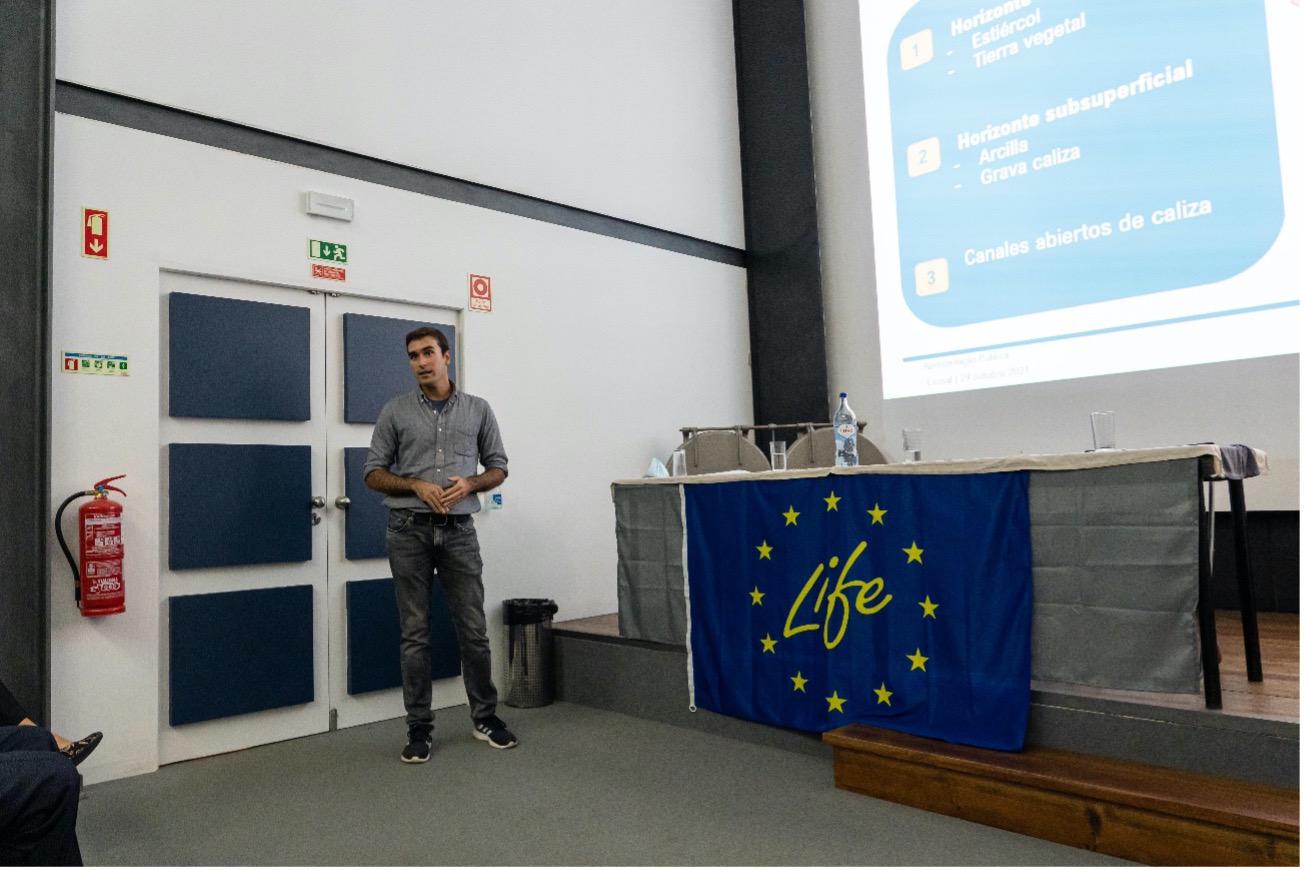 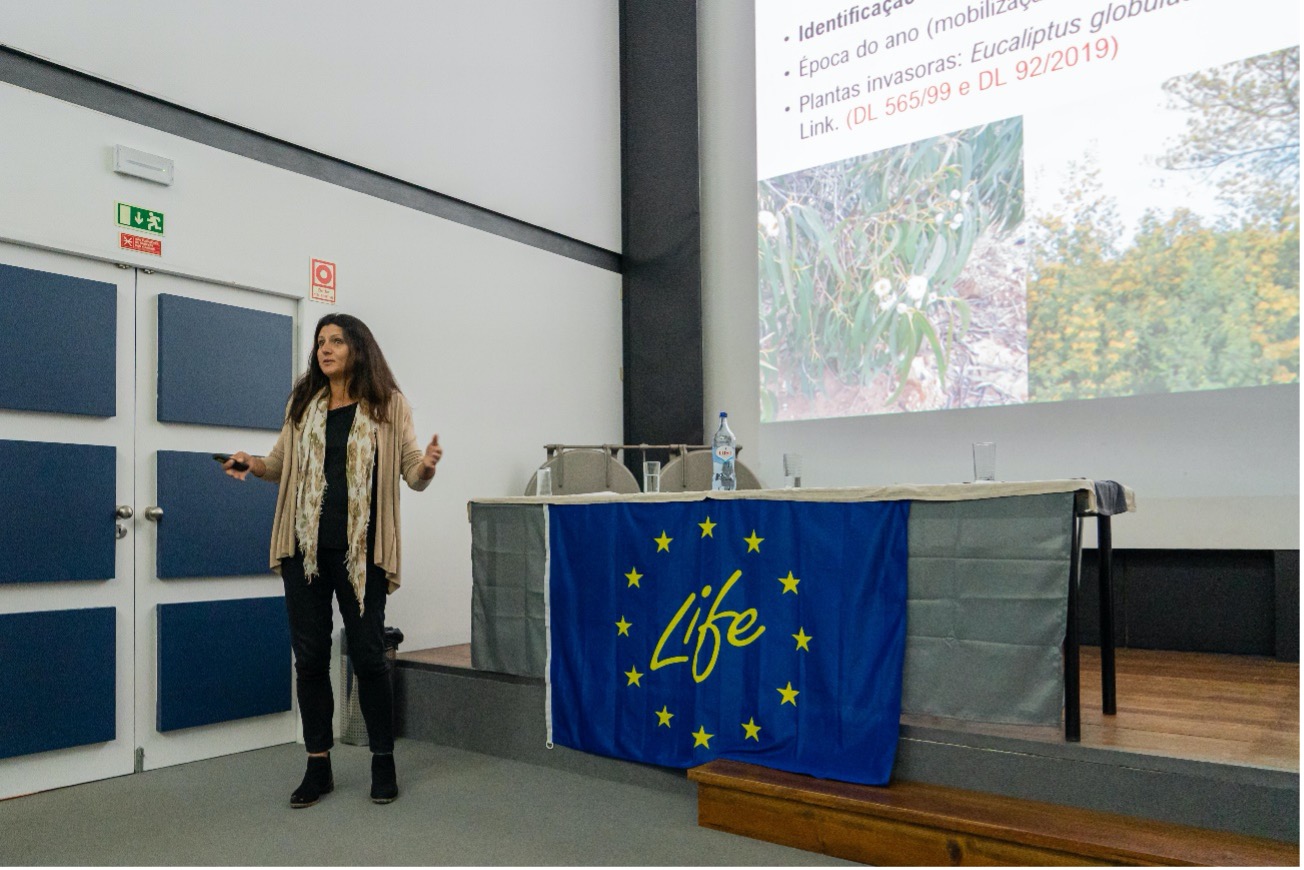 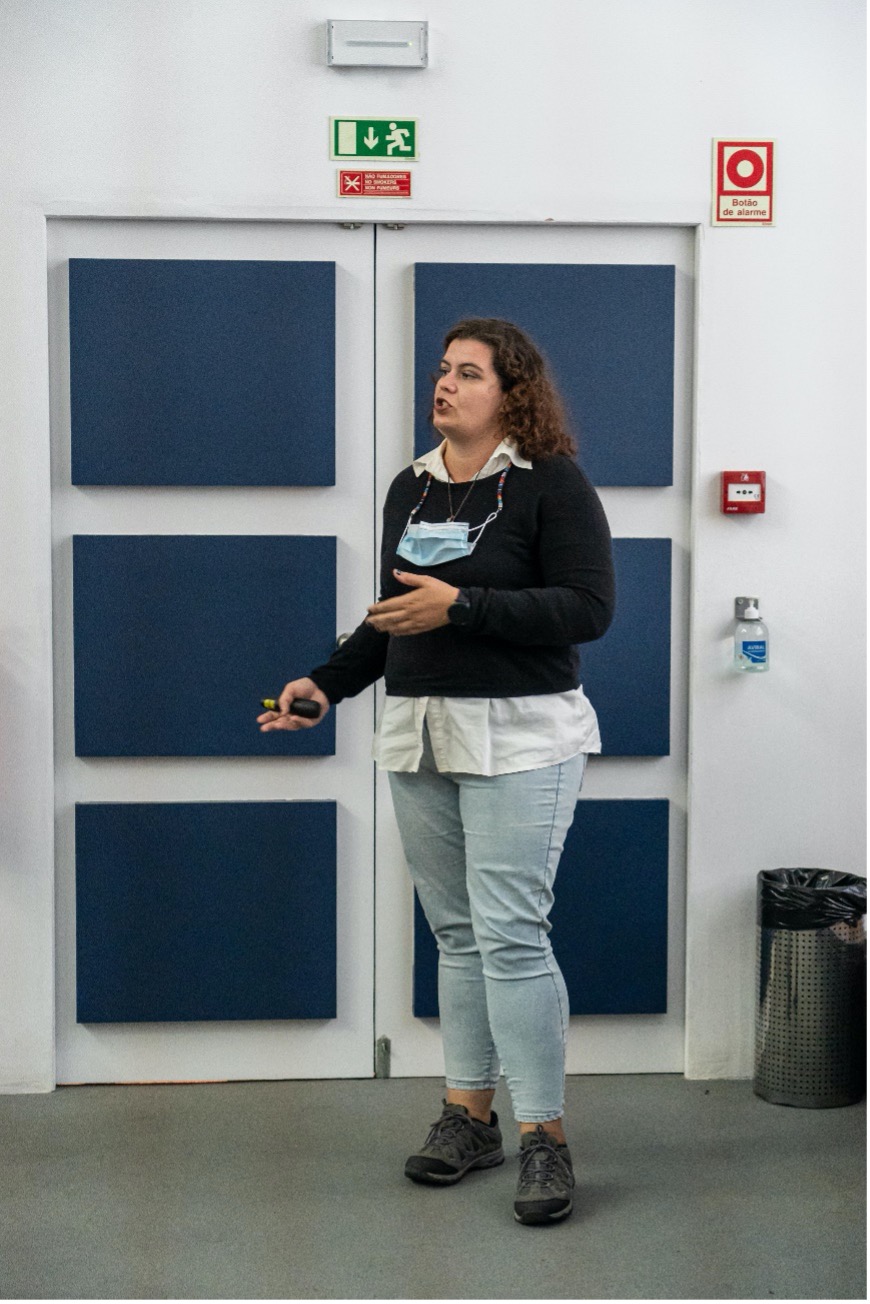 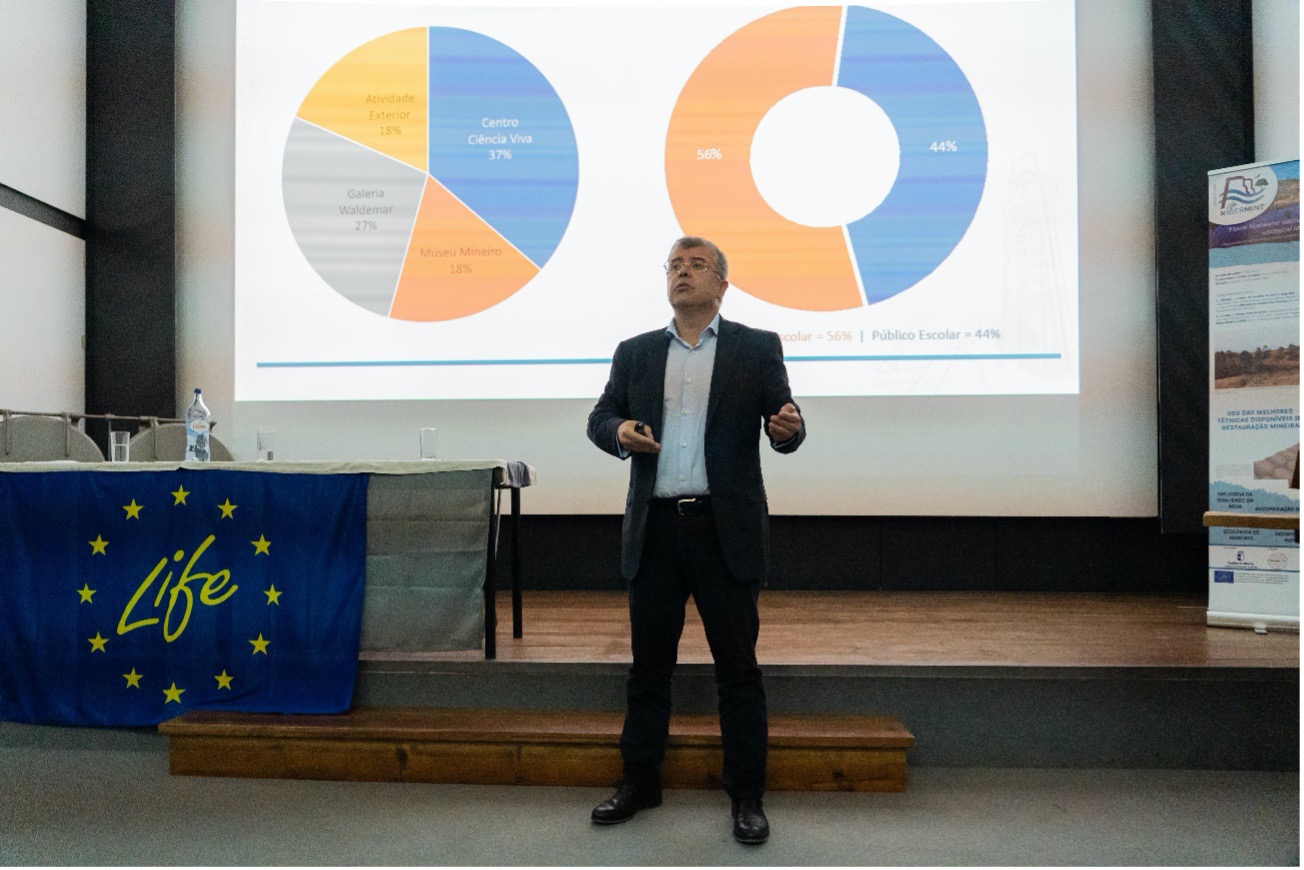 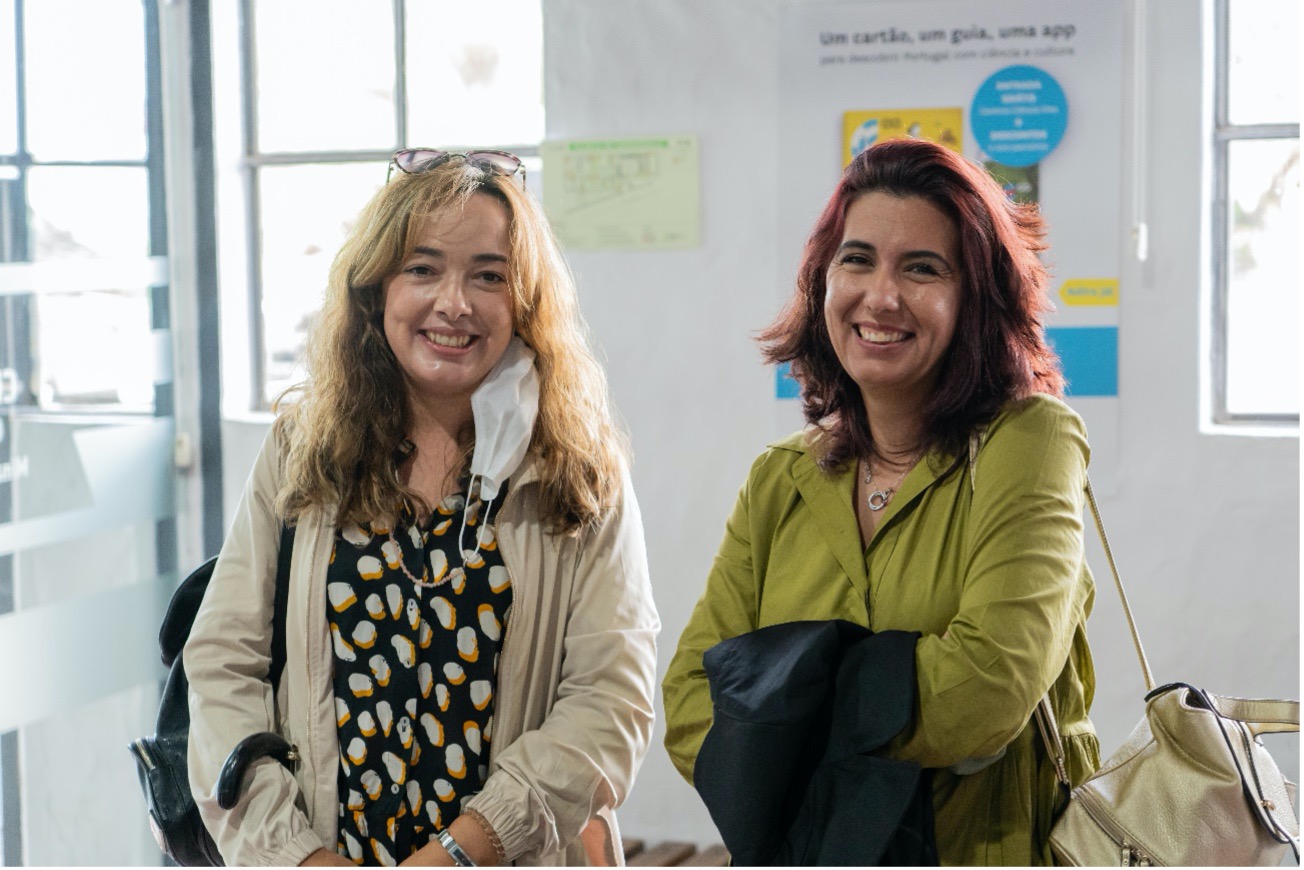 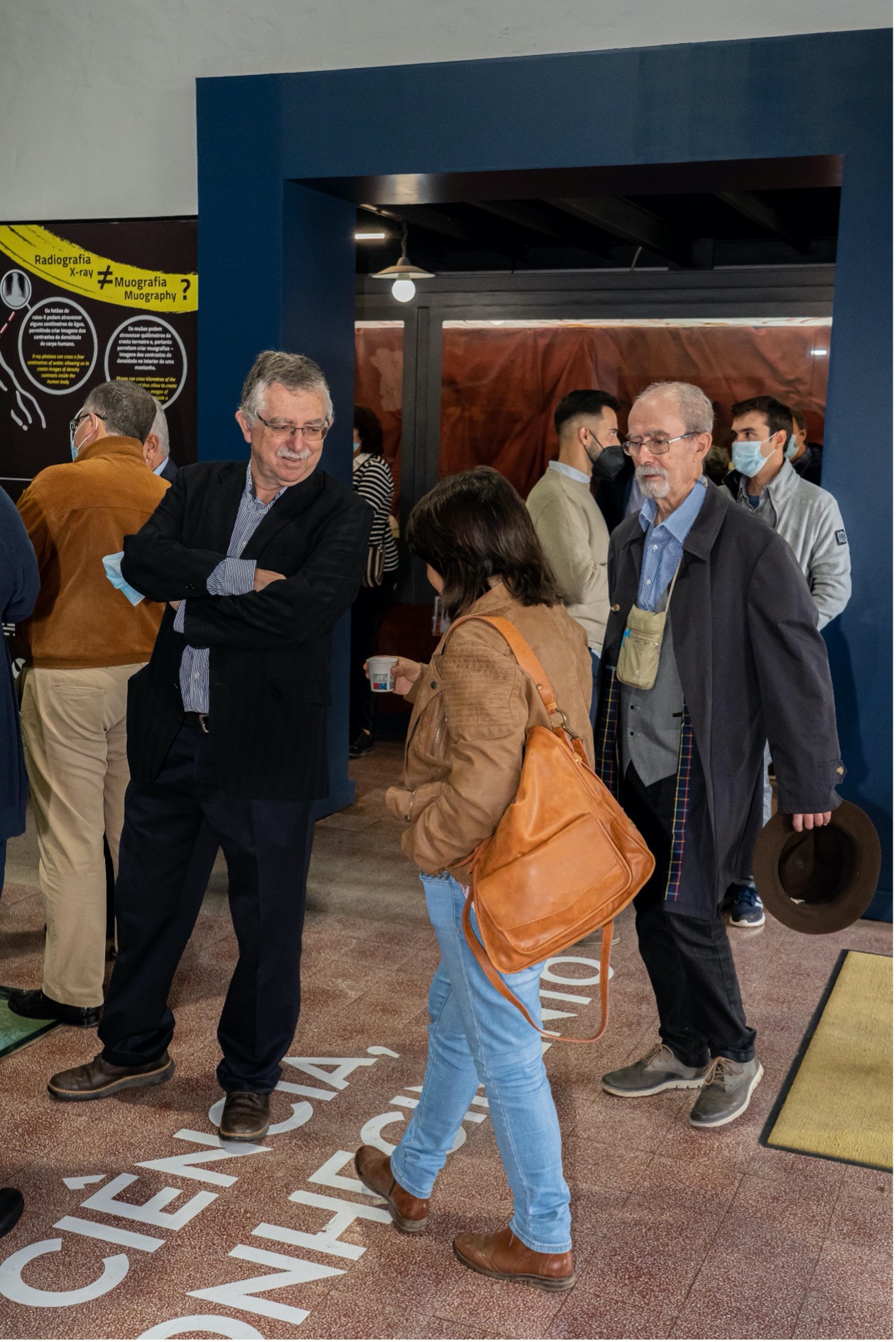 Some of the participants (in the foreground: Eng. José Martins, consultant in the field of environmental remediation, Dr. Mafalda Oliveira (Somincor-Lundin Mining) and Prof. Fernando Barriga, Professor in Geology at the University of Lisbon). Photo: @ BrunoGonçalves

After the presentations held in the morning, and a lunch at the Lousal Community Center, focusing on regional Alentejo cuisine, there was an opportunity for all participants to visit the Project’s intervention area, observe the work carried out “in situ”, listen and exchange views with the personnel, technicians and scientists involved in the development of the PPLousal. Through an act covered in symbolism, all participants were able to actively participate in its implementation, throwing to the ground the first seeds of the native plants that will germinate and enliven this area with life! 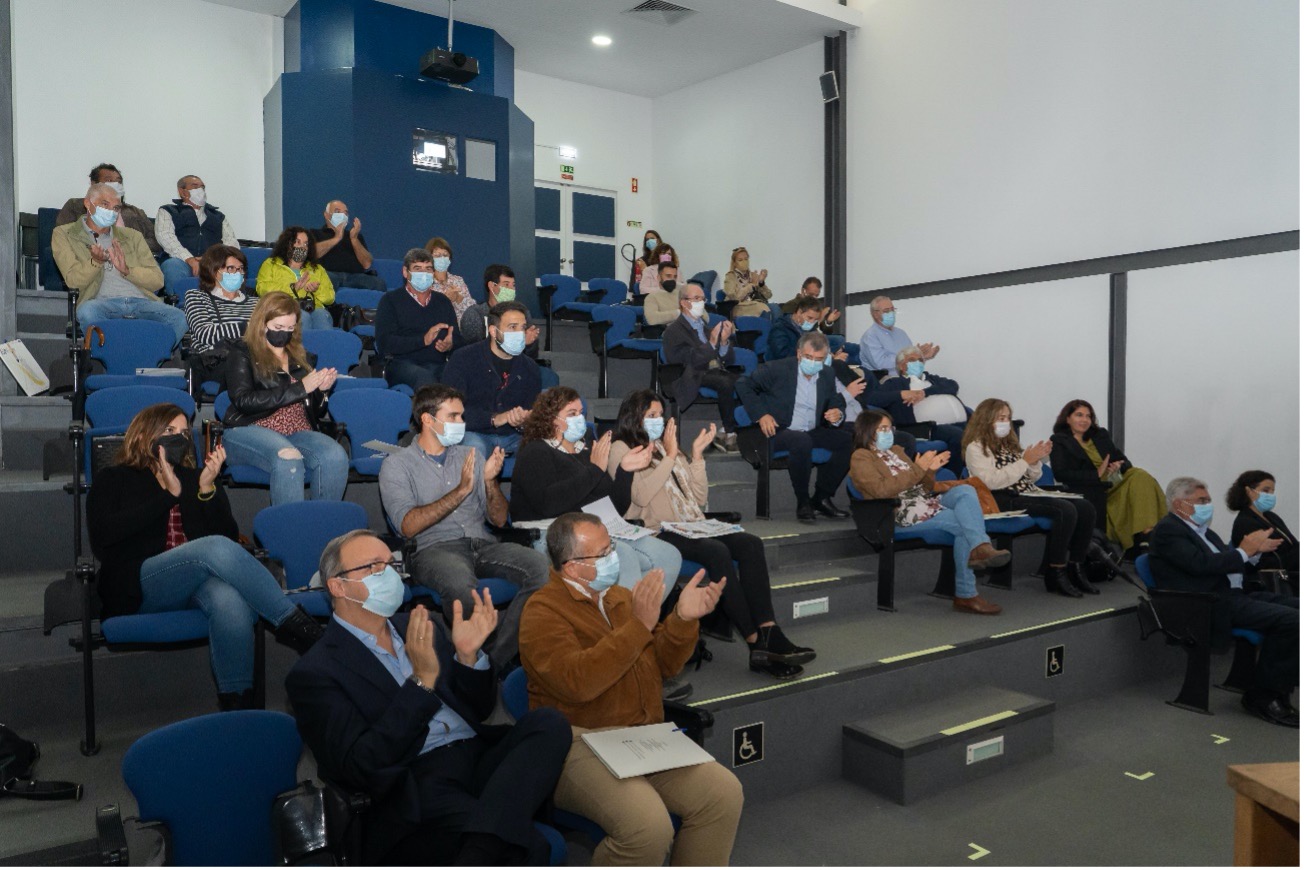 Reaction of the public reaction to the oral communications. Photo: @BrunoGonçalves 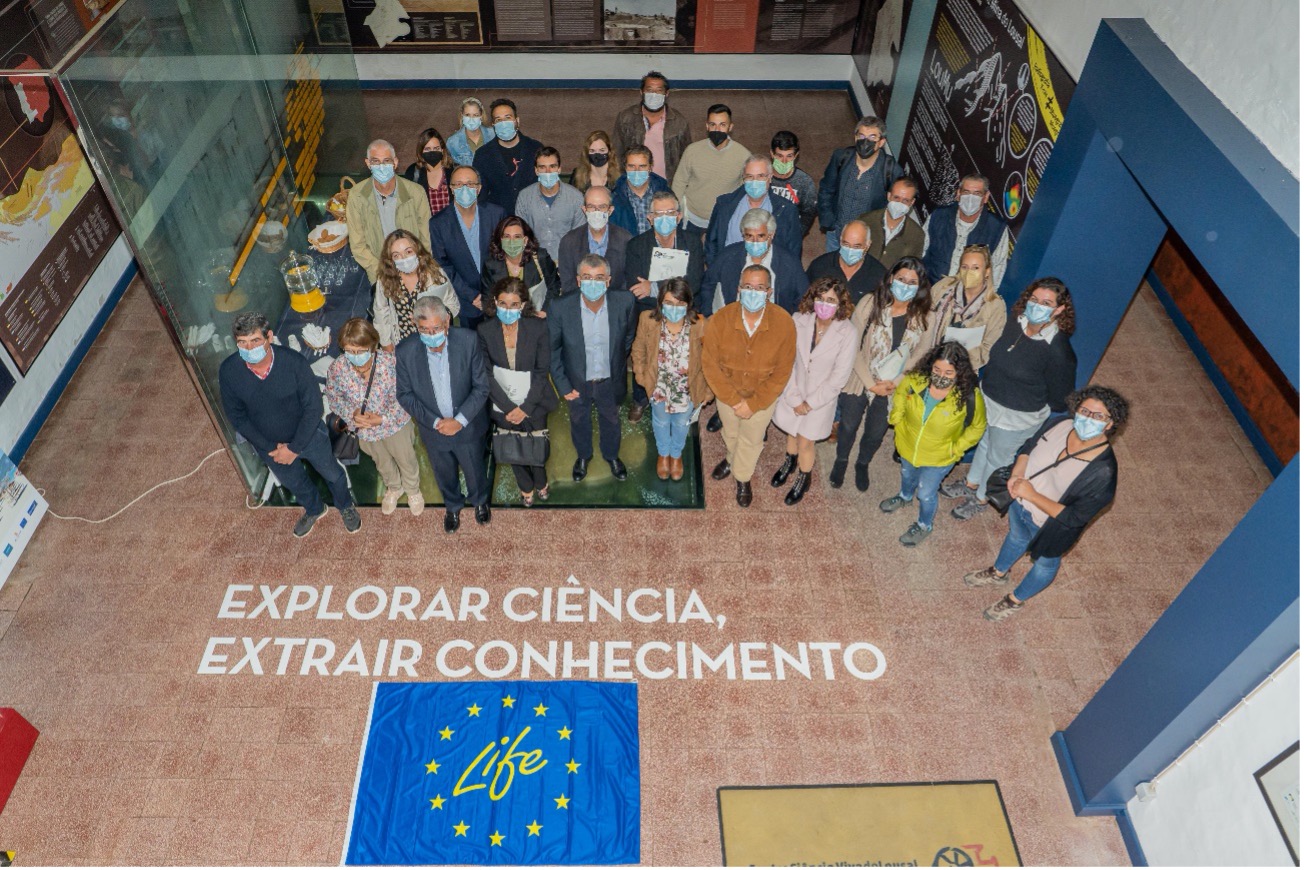 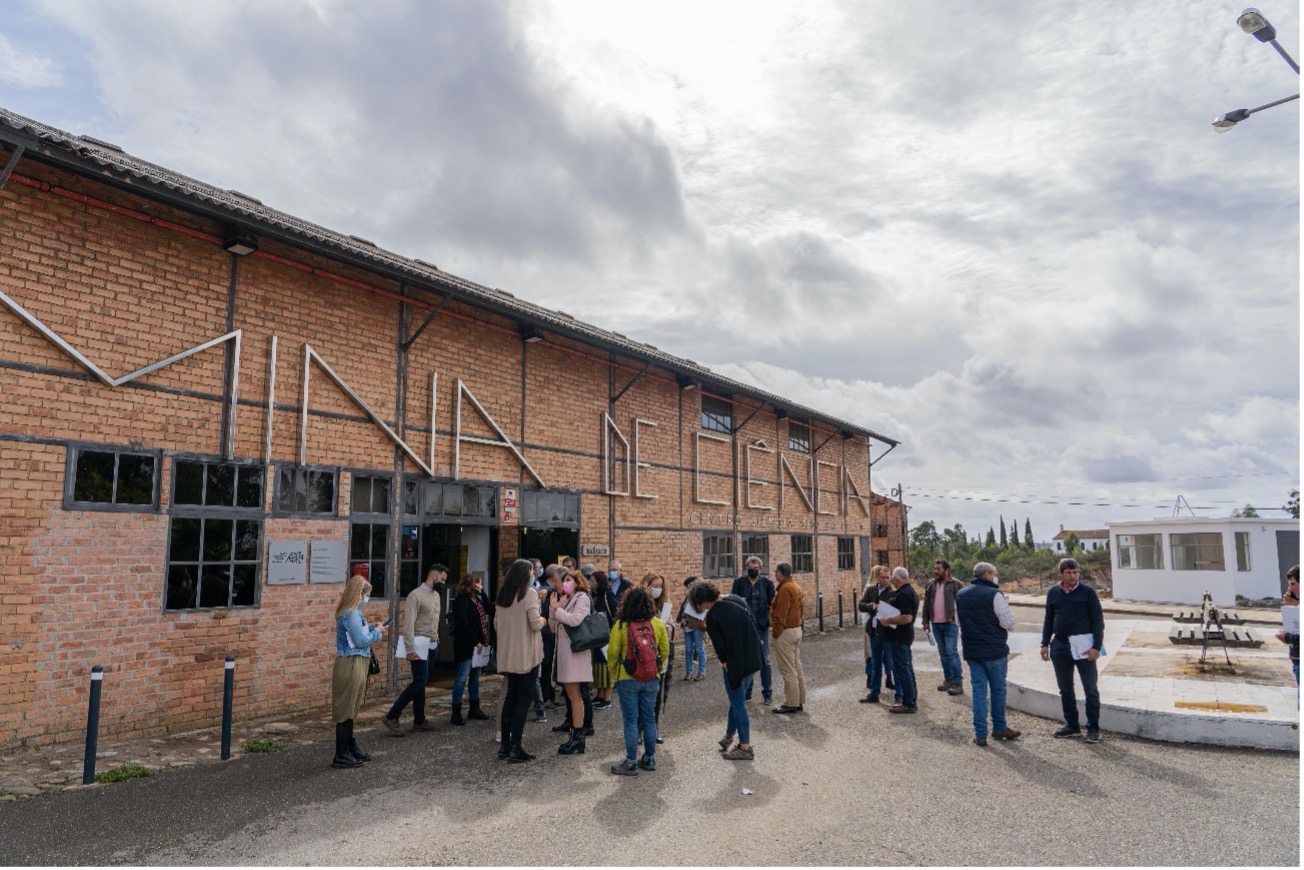 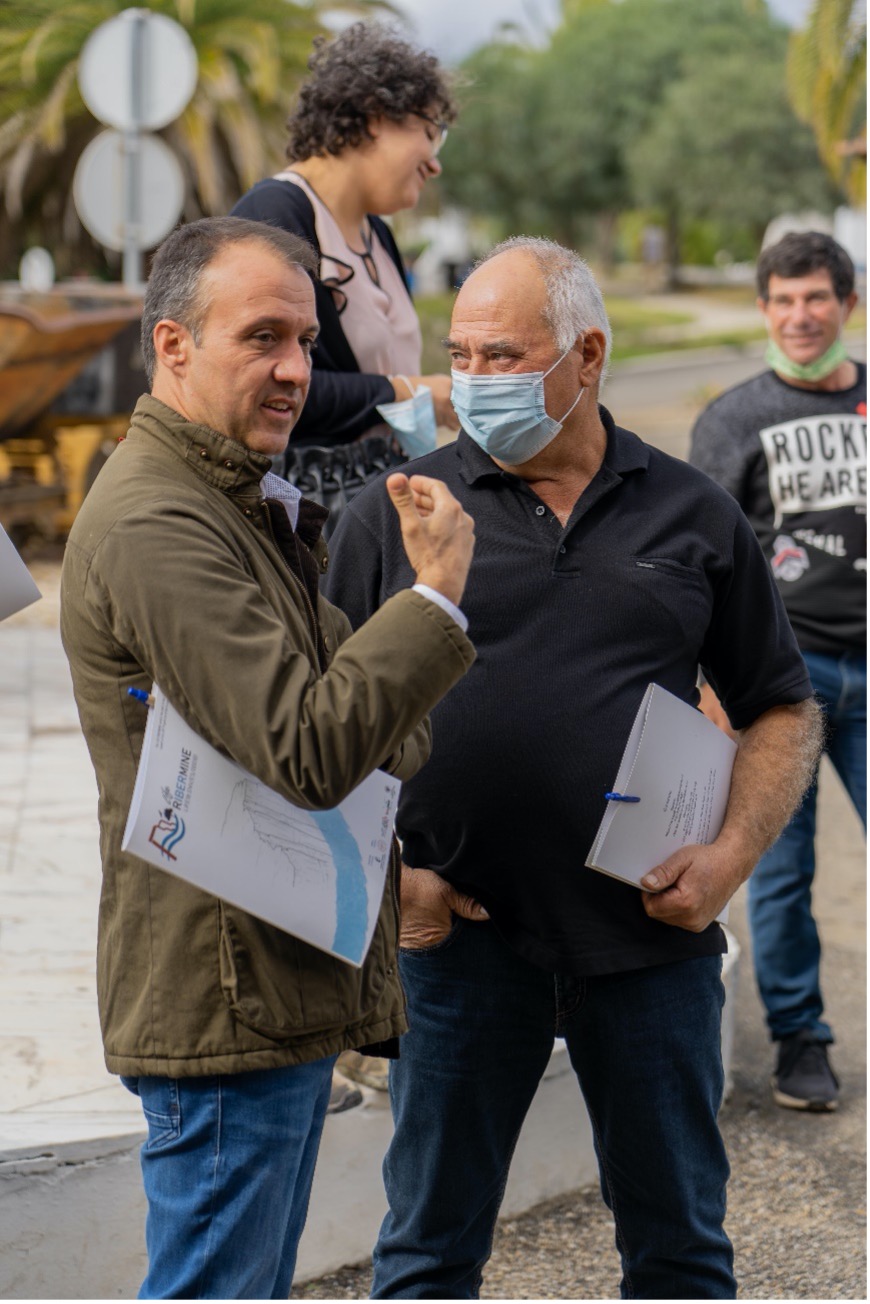 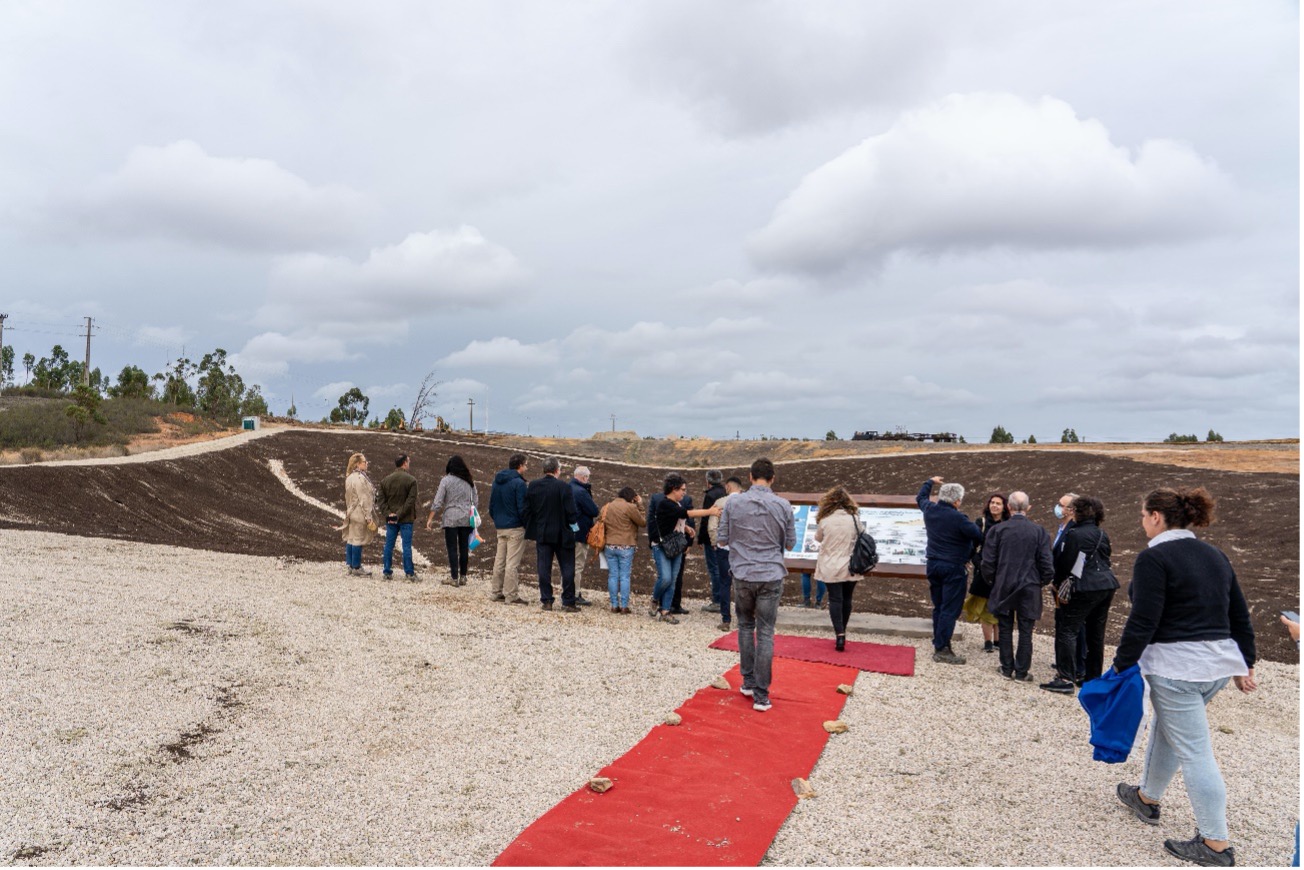 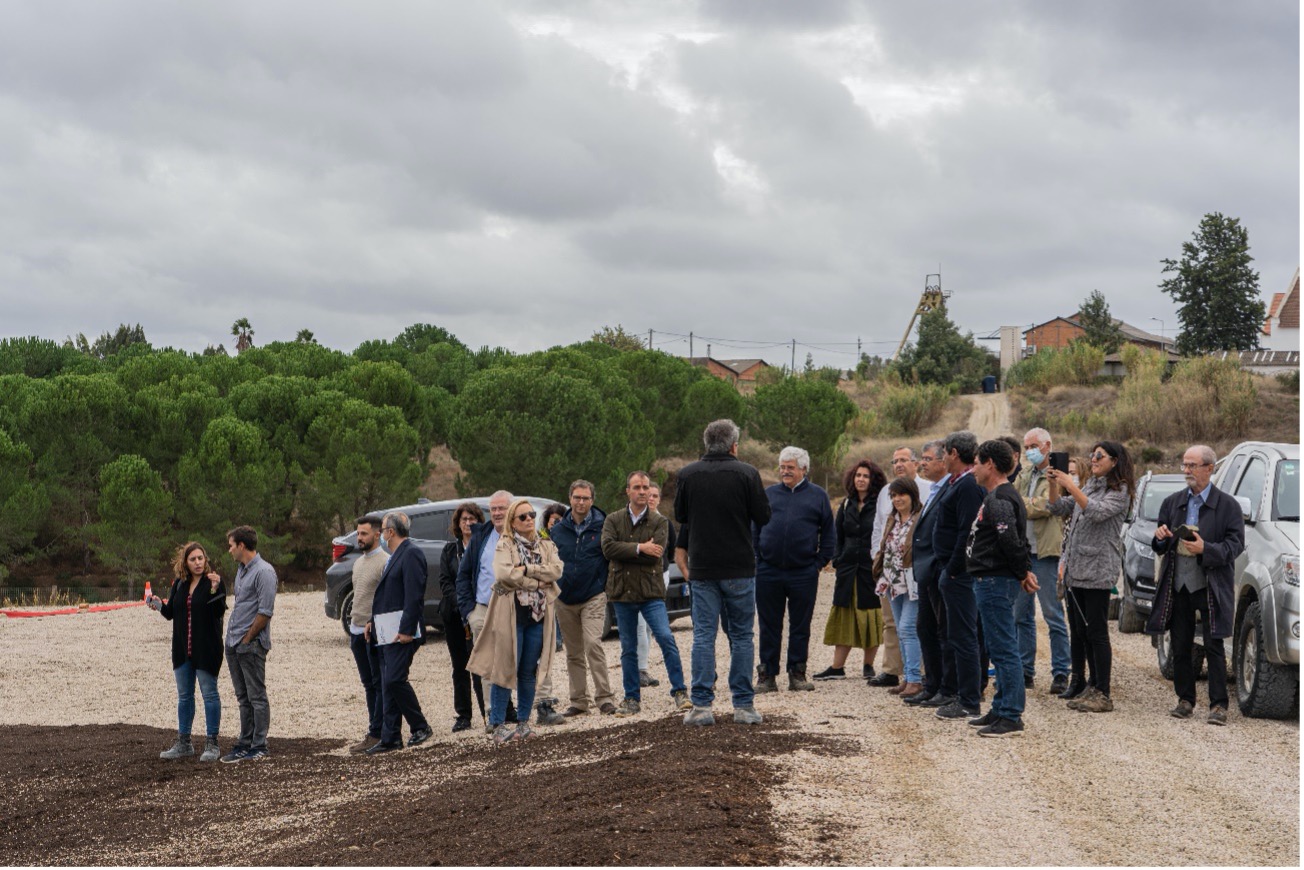 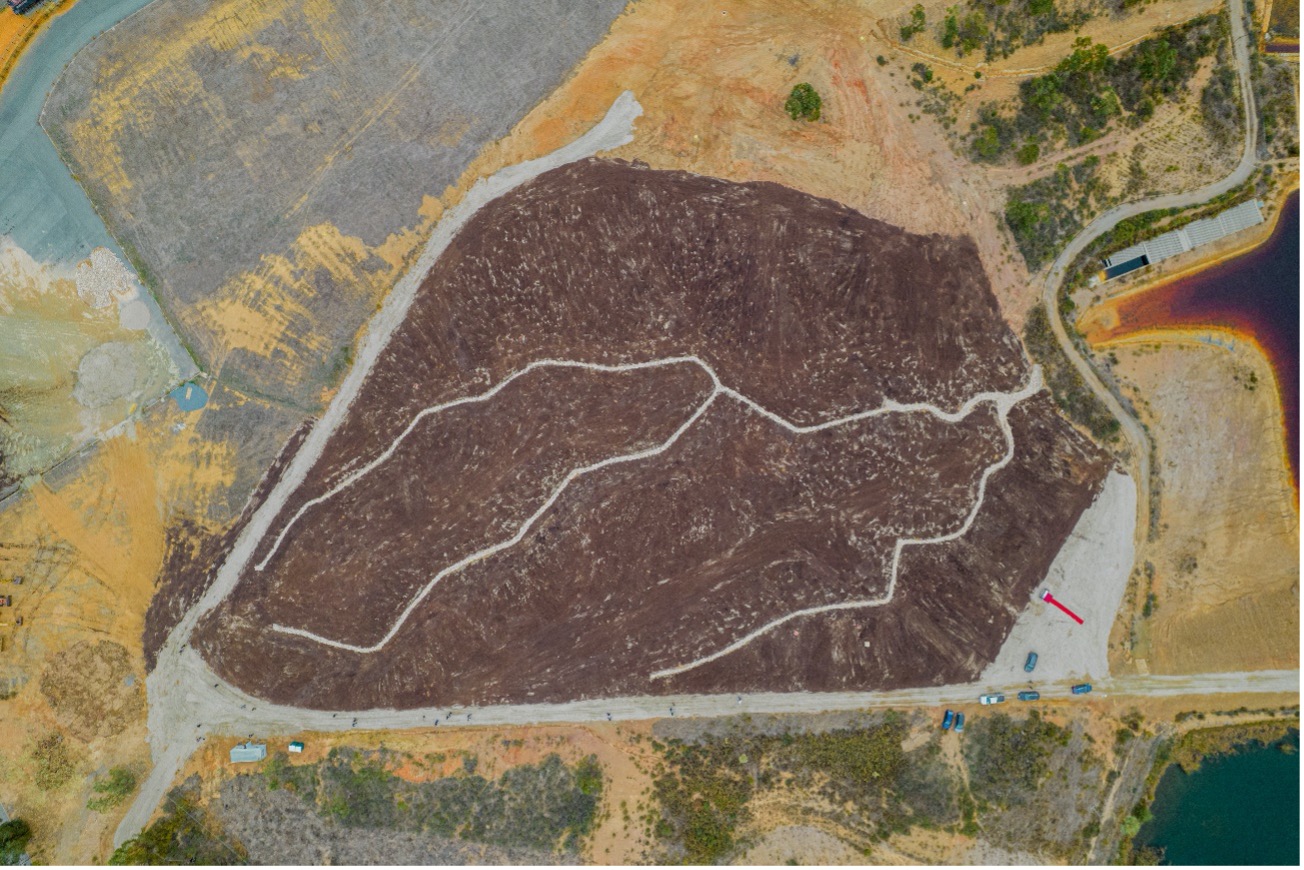 Aerial photo of the intervened space, at the date of the public presentation. Photo: @BrunoGonçalves 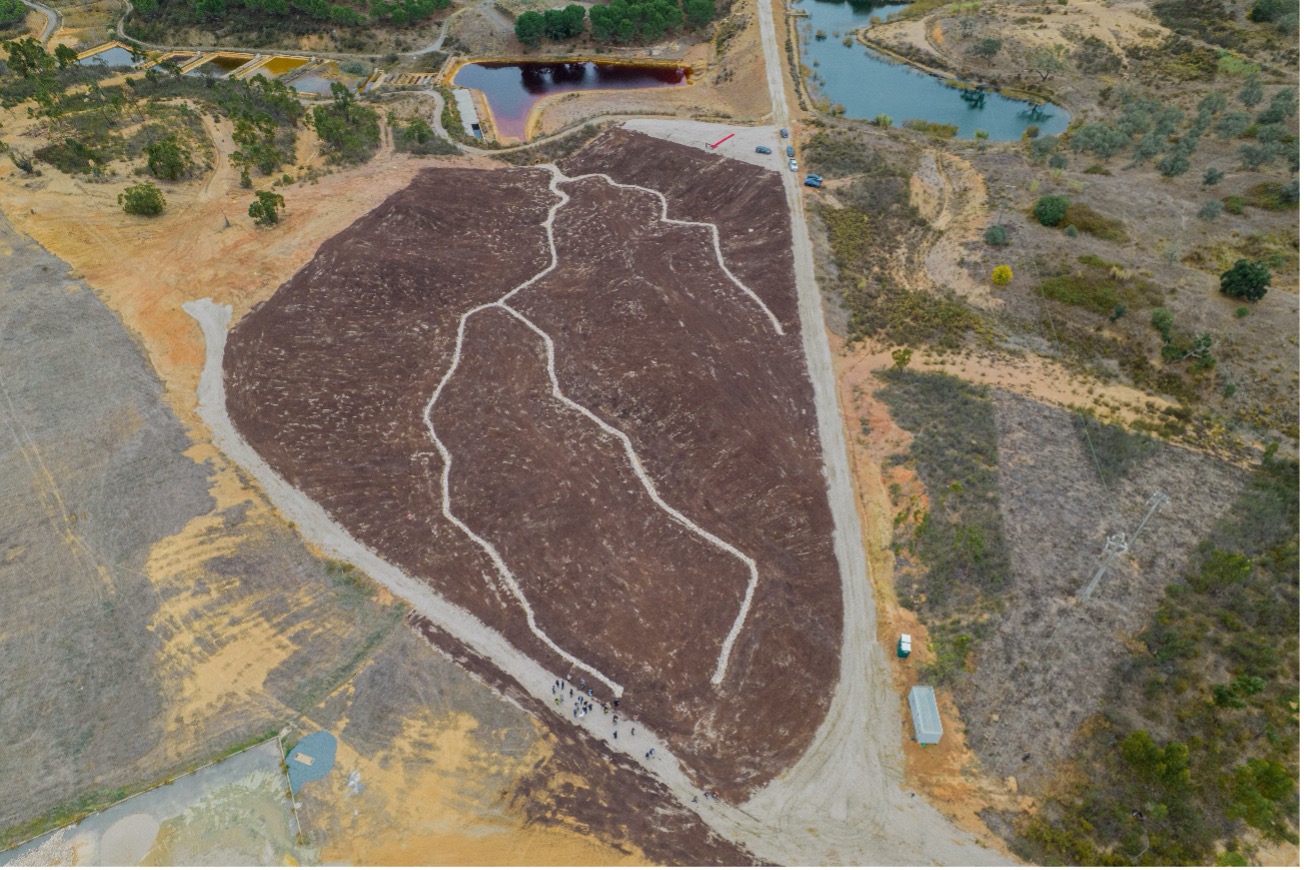 Another aerial perspective of the intervened area. Photo: @BrunoGonçalves/em> 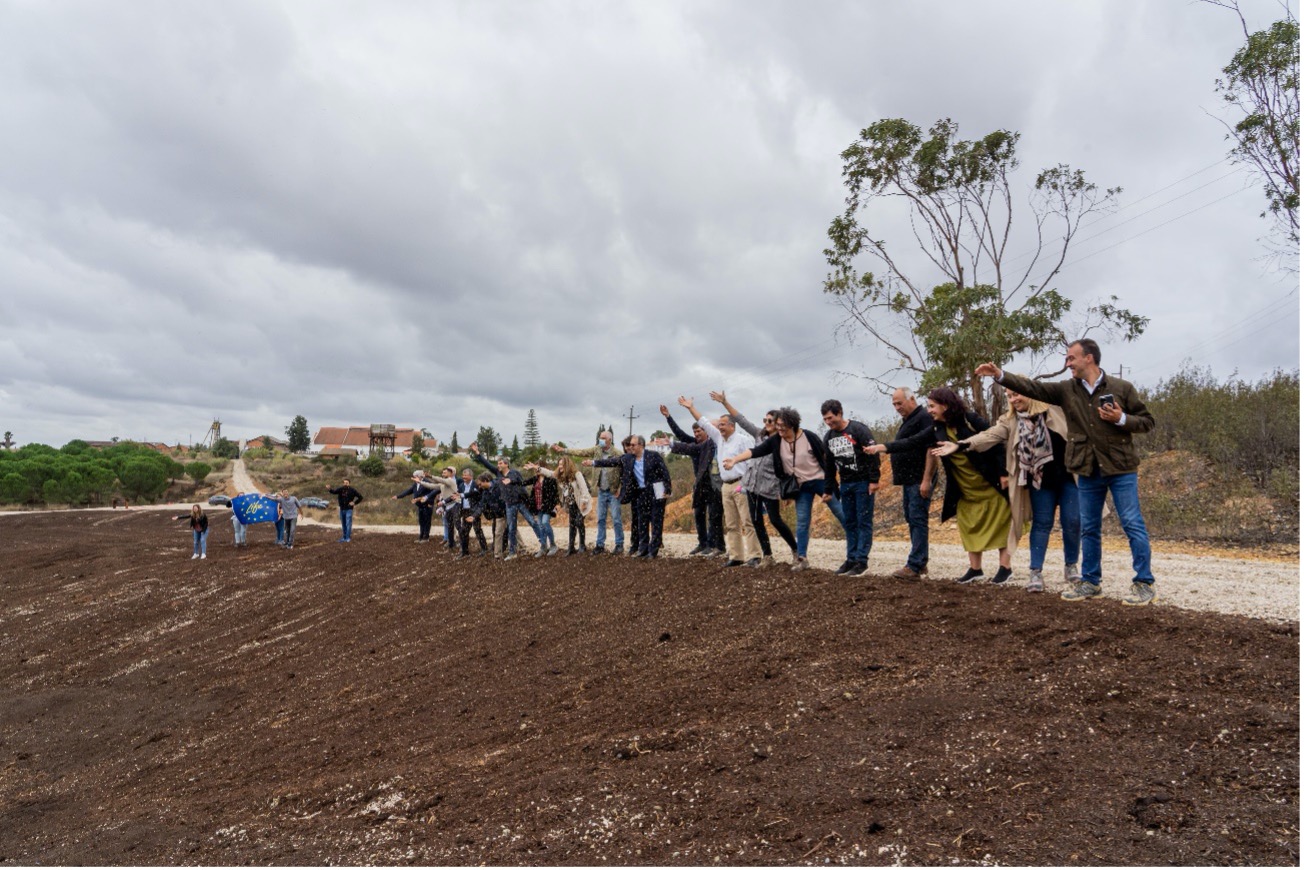 Sowing the seed to the ground. Photo: @BrunoGonçalves

Finally, in an atmosphere of great communion and joy, in the historic setting of the former Electric Power Plant of Mina, now the Museu Mineiro do Lousal, the public presentation was concluded, with a toast to the continuation of the success of this pioneering Iberian Project! 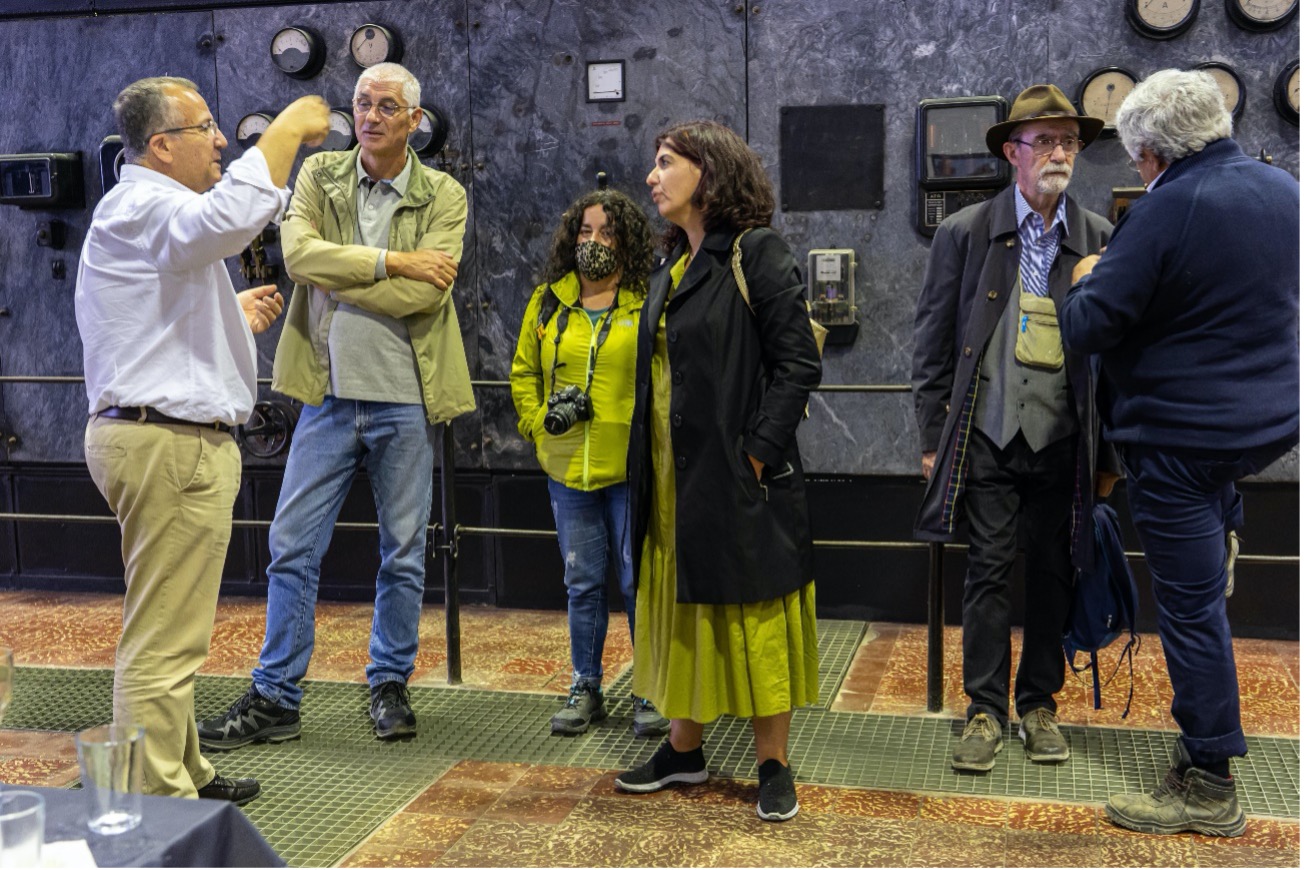 End of the day at the “Museu Mineiro do Lousal”. Photo: @BrunoGonçalves 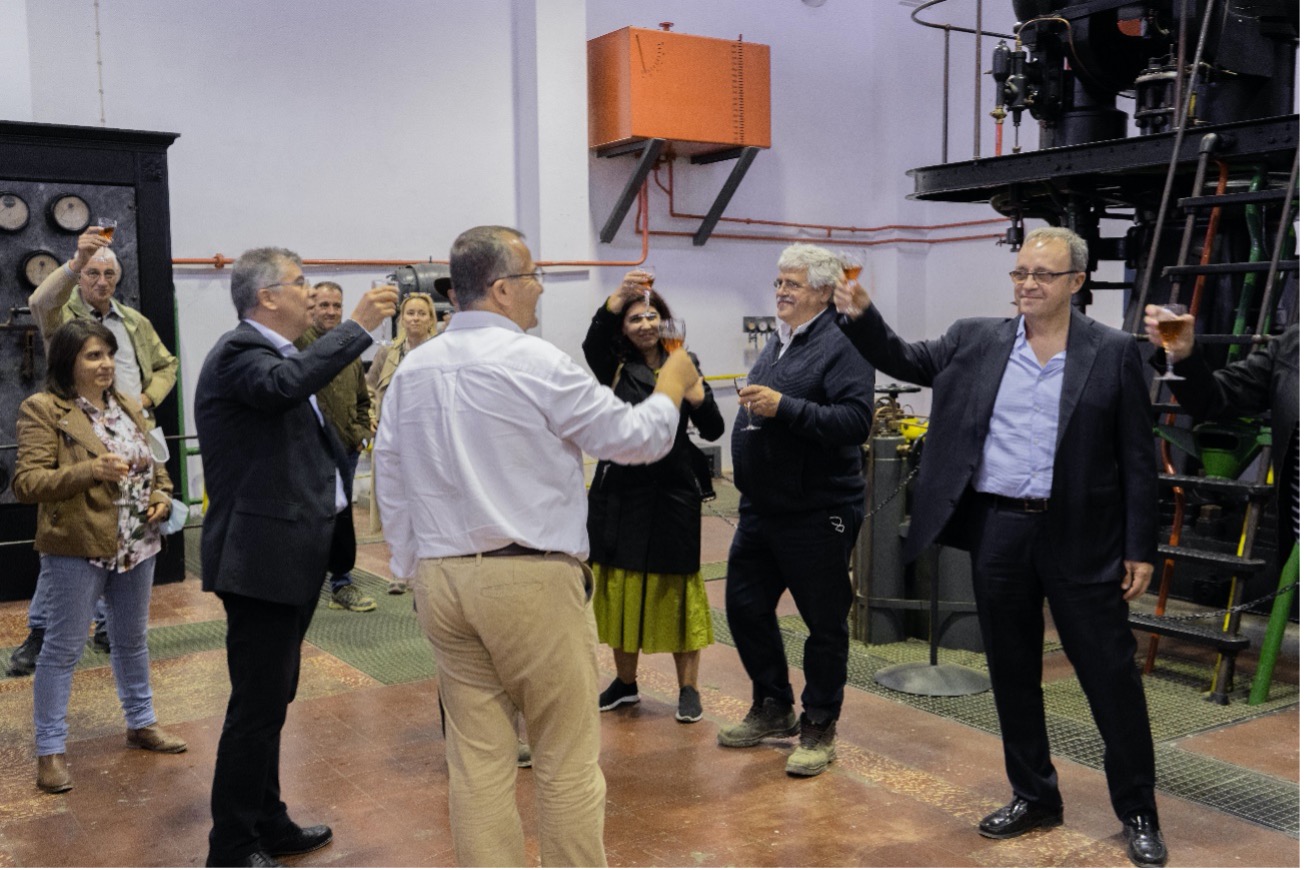 A toast to the continuity of many successes for the LIFE RIBERMINE project! Photo: @BrunoGonçalves

Aerial photo of the group, in the field. Photo: @BrunoGonçalves