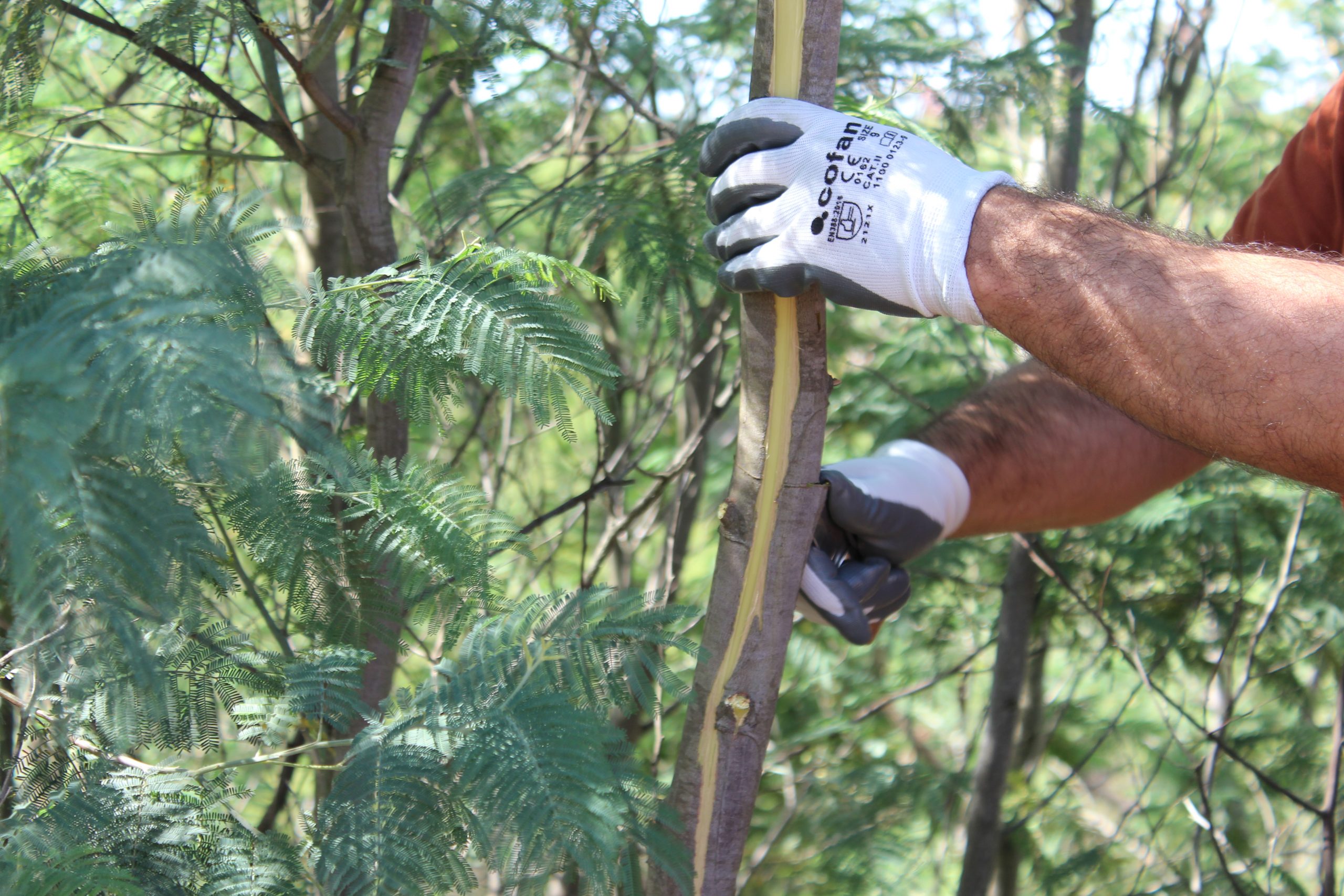 Control of Invasive Plants (Acacia sp.) in the intervention area of LIFE RIBERMINE in Lousal

The LIFE RIBERMINE project organized a theoretical-practical training on the control of invasive plants, namely acacias, on the 26th of May, as part of the preparatory actions for the Lousal Restoration Plan. The activity entitled “Control of Invasive Plants – Acacia sp. and chorão ”, developed between 9 am and 1 pm at Centro Ciência Viva do Lousal (1.30 hour – theoretical part in auditorium and 2.30 hours of practical field work) and was promoted by the LIFE Biodiscoveries project, LIFE RIBERMINE networker.

The target audience was everyone interested in acquiring more knowledge on the subject, including technicians from CCVLousal directly linked to the Project and its dissemination, as well as members of the public. In addition to 5 members of the CCVLousal staff, two technicians from the City Councils of the region (Environmental Education and Green Spaces of the Municipality of Sines) participated, a technician from a state body linked to the defense of nature and the environment (Nature Conservation Institute) and Forests), two teachers from schools in the region (Agrupamento de Escolas de Sines), a businesswoman from the tourism sector (AlentejoTurismo) and a private individual (owner of land invaded by acacias).

In the vicinity of the intervention area there is a considerable and expanding nucleus of the exotic and invasive Acacia dealbata Link. (mimosa), estimated at about 70 adult individuals and several dozen juveniles. In addition to this, there are other centers, scattered throughout the mining village of Lousal. As a preparatory and complementary activity to the work in the project’s intervention area at Lousal, and in order to control the expansion of this species given its spatial proximity (thus safeguarding the objectives of revegetation and the PRLousal itself), other similar actions will be carried out, with a view to its future eradication. The available physical methods currently considered most effective for this species were applied: the peeling of adult specimens and the manual pulling of juveniles. In this action, in less than 3 hours, approximately three dozen grown trees were stripped and several juvenile specimens were uprooted.

This was yet another opportunity to raise awareness of the LIFE RIBERMINE Project and its reality in situ, allowing for real public involvement. It proved to be extremely useful for raising awareness and disseminating knowledge about environmental issues, the impacts of mining and its mitigation, relating them to the problem of biological invasions.
The peeling of acacias will continue to be carried out in specific actions, which may be repeated whenever deemed necessary and, desirably, involving the public and environmental volunteering. 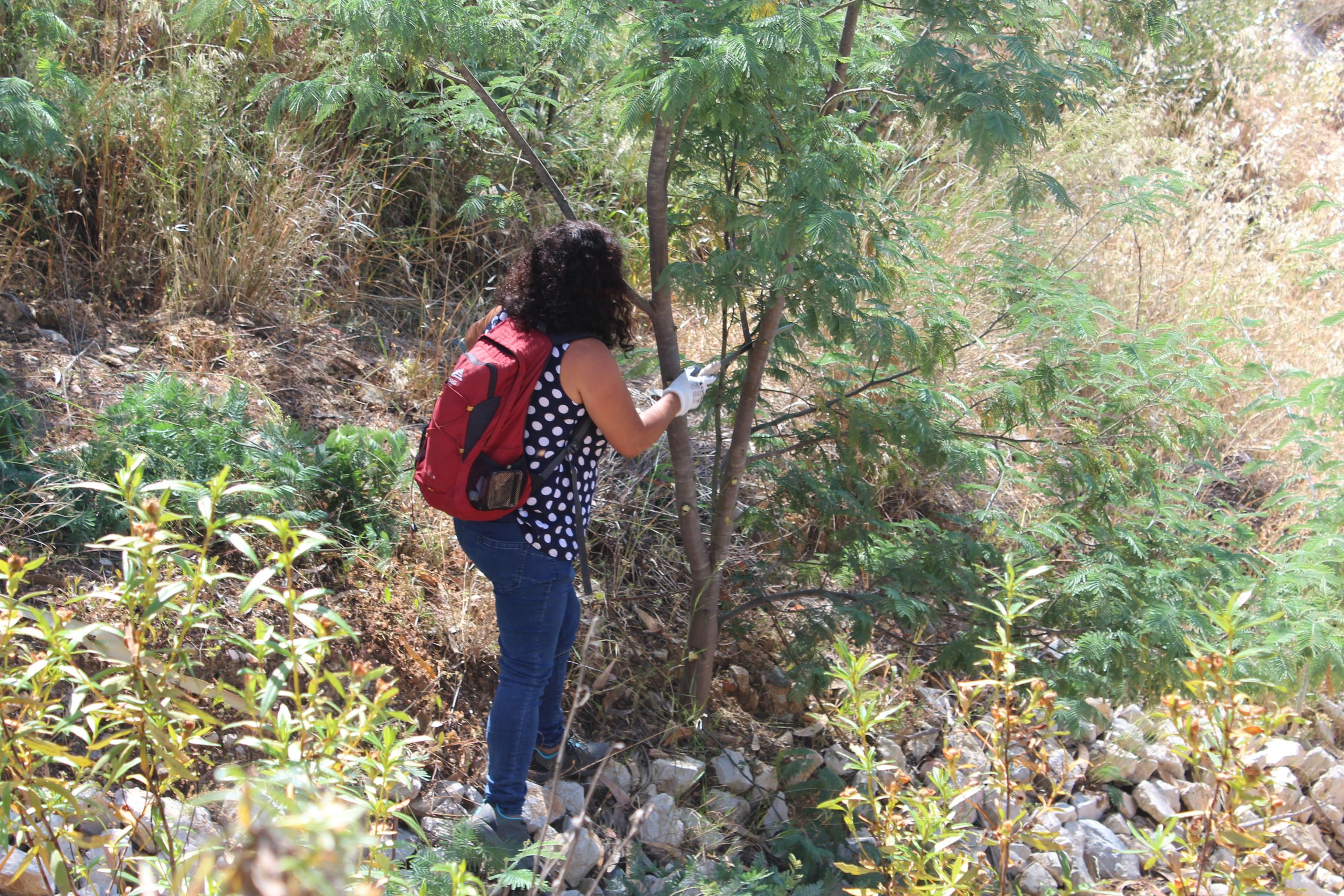 Participant performing the peeling of a tree.

Additional information:
Acacias have a high ecological amplitude, colonizing disturbed and fire-prone areas very effectively, creating monospecific stands that replace native habitats, proliferating on the fringes of forest stands, pine forests and scrublands, dunes, watercourse shores, slopes with high exposure, shoulders and embankments. In Portugal, all species of the genus Acacia sp. have been considered invasive since 1999 (DL 565/99) and their control and eradication are provided for by Decree-Law No. 92/2019 (Mainland and Madeira). In particular, Acacia dealbata Link., Is a plant originally from Australia and Tasmania, which in Portugal presents a risk level of 31 (according to Pheloung et al. 1999 and Morais et al., 2017), a high value, since a species with values above 13 is considered invasive. 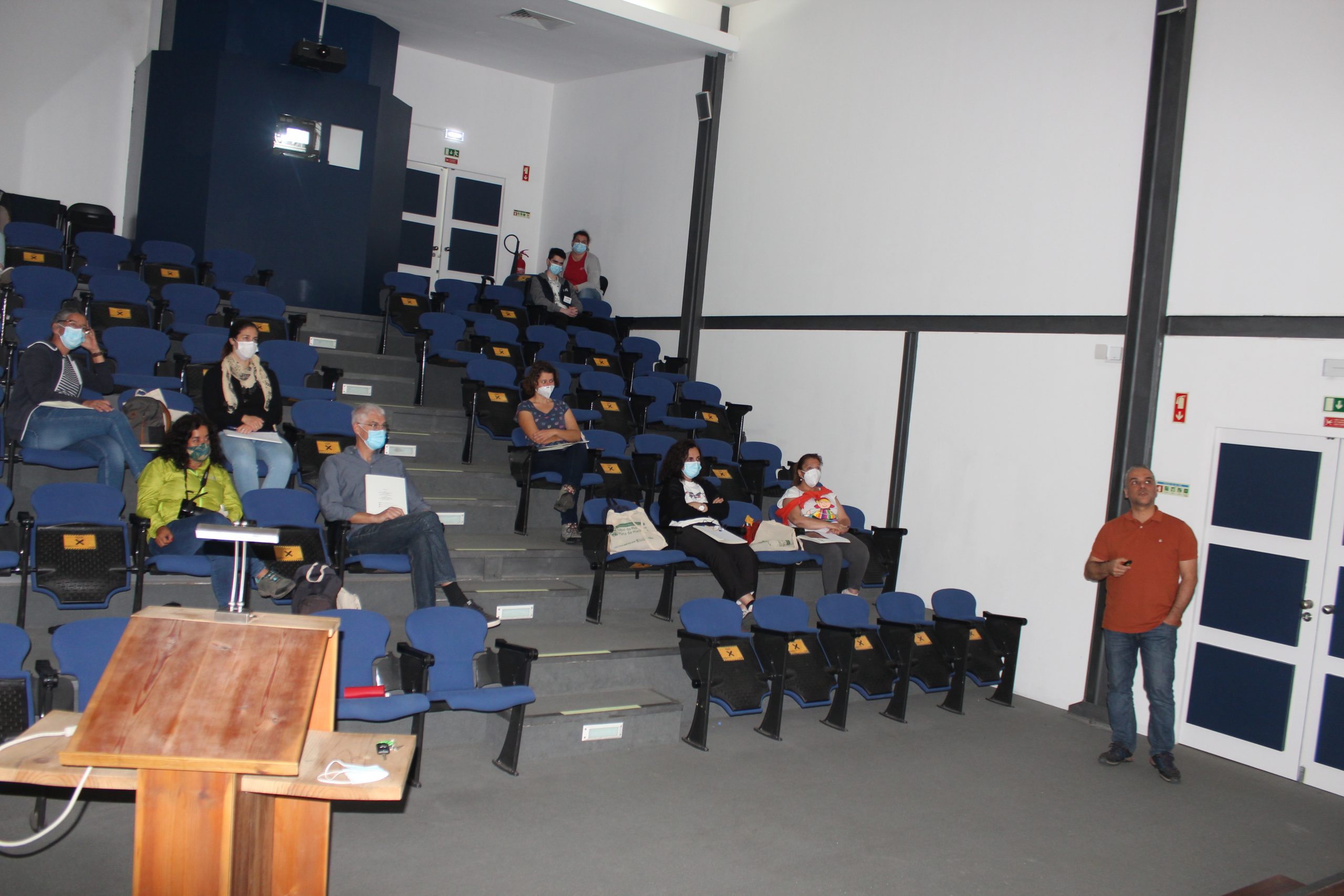 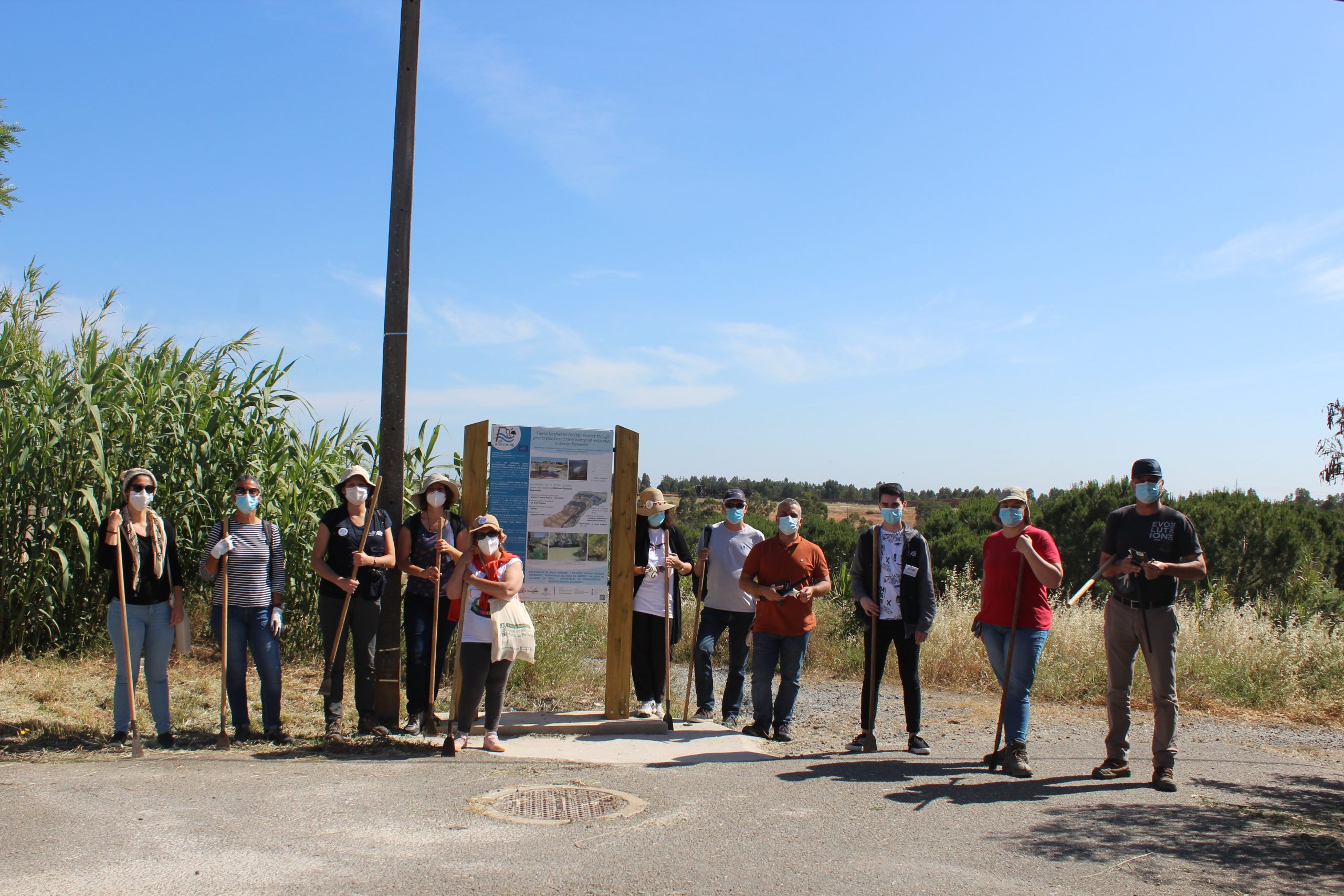 Some of the participants in the training action of invaders control. 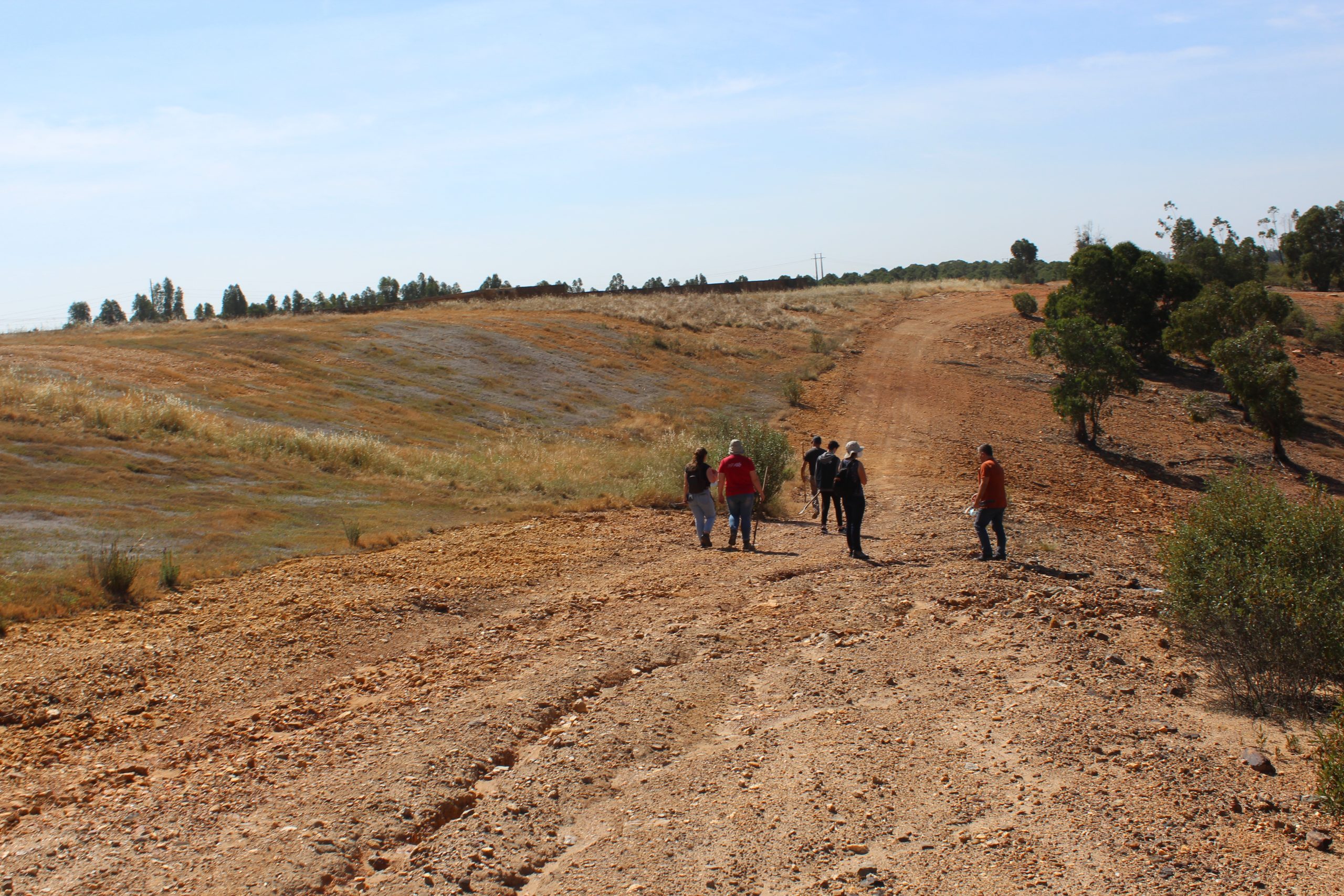 Aspect of the future area of intervention in Lousal.

Demonstration of the peeling of Acacia dealbata Link .. This is one of the physical methods proven to be most effective for the destruction of this species. 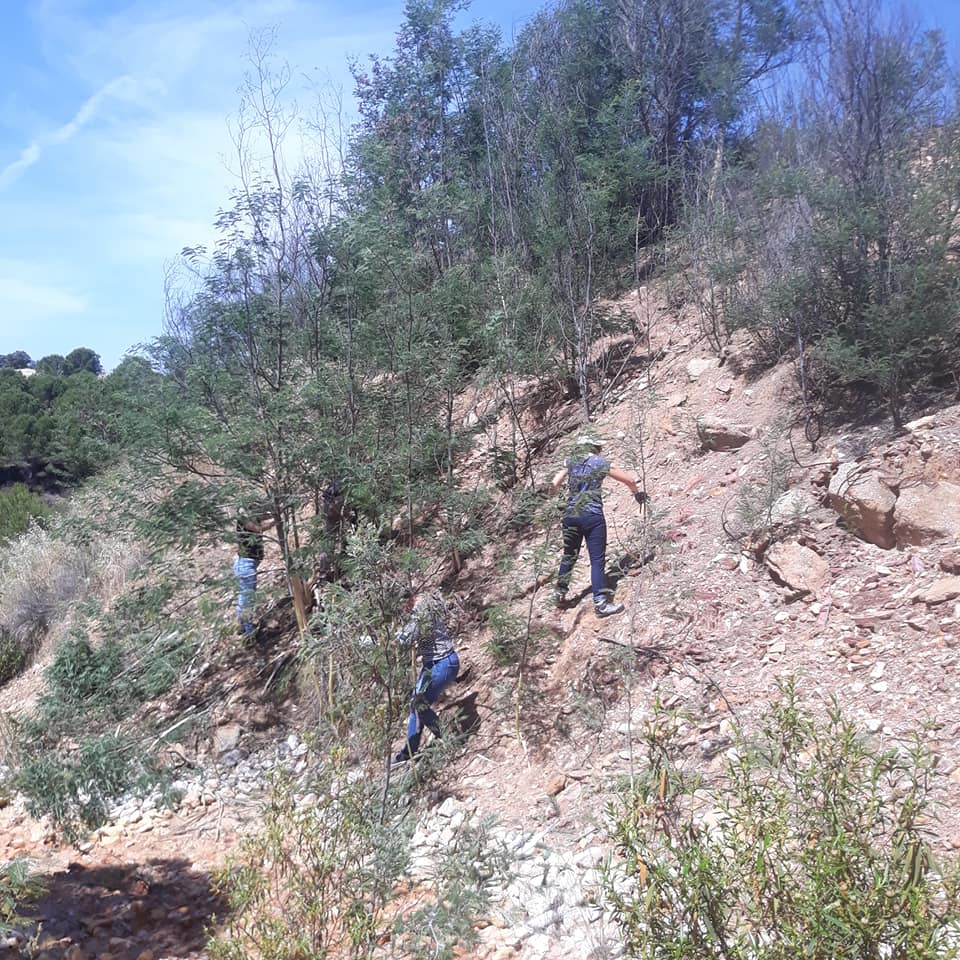 Peeling in areas of inclined slope, where it becomes more difficult to work. 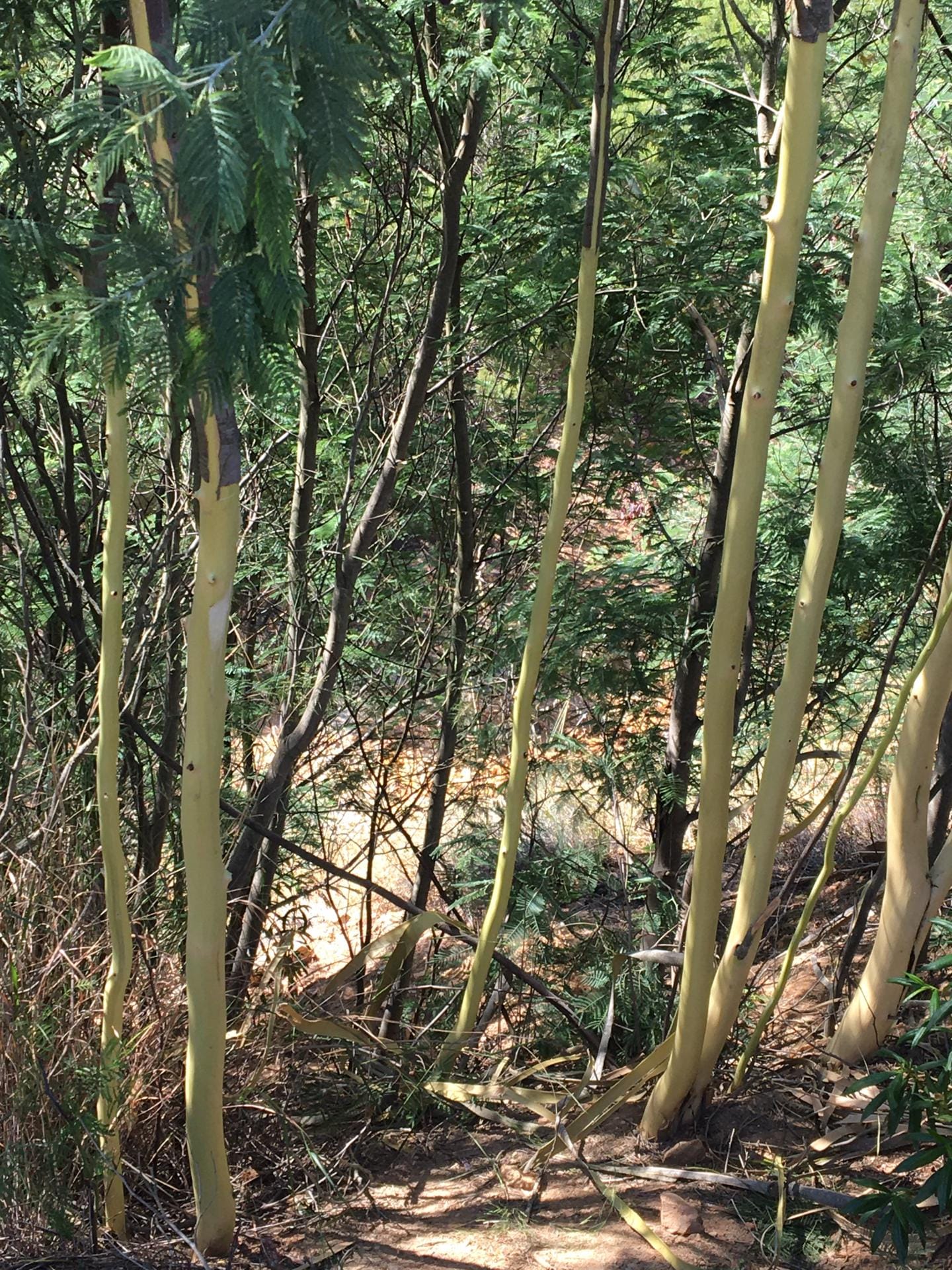 Final result. After peeling, individuals take an average of 3 to 6 months to dry, and in some cases, they can reach up to 3 years. Monitoring of the process and persistence in control tasks is necessary. When the tree is death, the plant material can be removed from the soil (photo provided by Flora Ferreira, participant in the action).