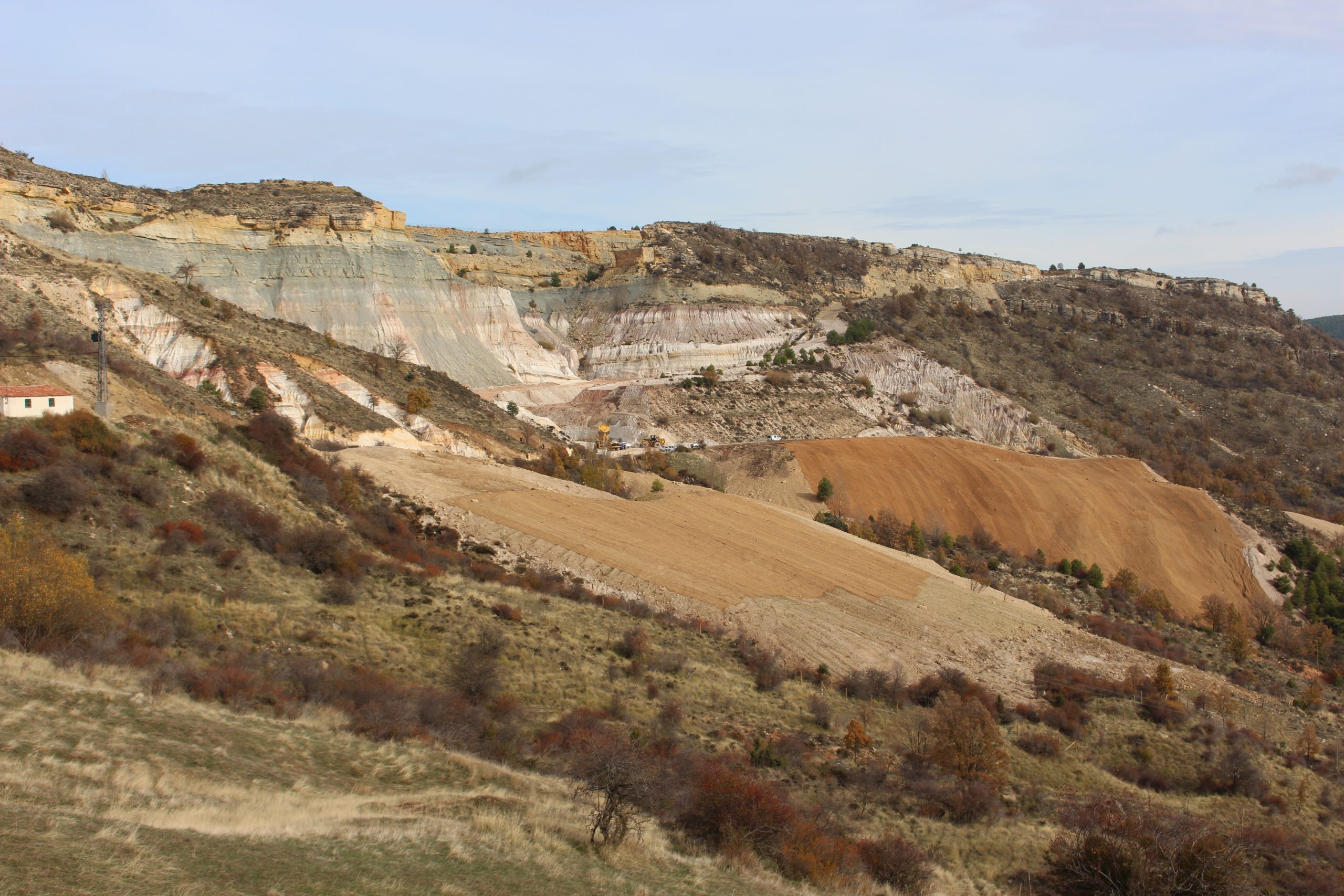 SANTA ENGRACIA MINE: CONCLUSION OF THE FIRST STAGE OF THE EXTERIOR HEAPS REVEGETATION

Once the topographic remodeling phase was completed and the edaphic substrates had been spread, LIFE RIBERMINE carried out the first phase of the revegetation tasks in the external heaps of the Santa Engracia mine (Peñalén), which will be concluded in the second half of November. The objective of these measures was to initiate the substrate plant colonization of the substrate, by sowing seeds of herbaceous species typical from the region, complemented by the application of organic blankets to protect the soil from water erosion, in the most vulnerable areas due to their greater inclinations.
In the surfaces with slopes greater than 45% (that constitute a significant part of the eastern heap), a mulch was applied to the surface, consisting of plant material harvested in meadows of the area (a mixture of straw and seeds). Subsequently, it was protected with a coconut fiber mesh attached with clamps.

In the remaining areas of the external heaps, some herbaceous species were sown and an organic amendment (sheep manure) and fertilizer was applied, later revolving the soil to homogenize the mixture. In order to ensure that the vegetation cover is sufficient to prevent the triggering of erosive processes, winter cereal seeds (wheat) were added to the initially proposed mixture, reaching a final sowing density of 530 seeds / m2 in the areas less sloping, and 800 seeds / m2 in the areas with higher slopes. In the latter, an organic blanket of hay and coconut mesh (50%) was also applied, in order to provide a greater protection to the soil.
All these works were carried out with great professionalism, by the operators involved. The revegetation tasks will continue in the next phases, with the planting of tree species and new sowing, as the geomorphological remodeling of the Santa Engracia mine is completed. 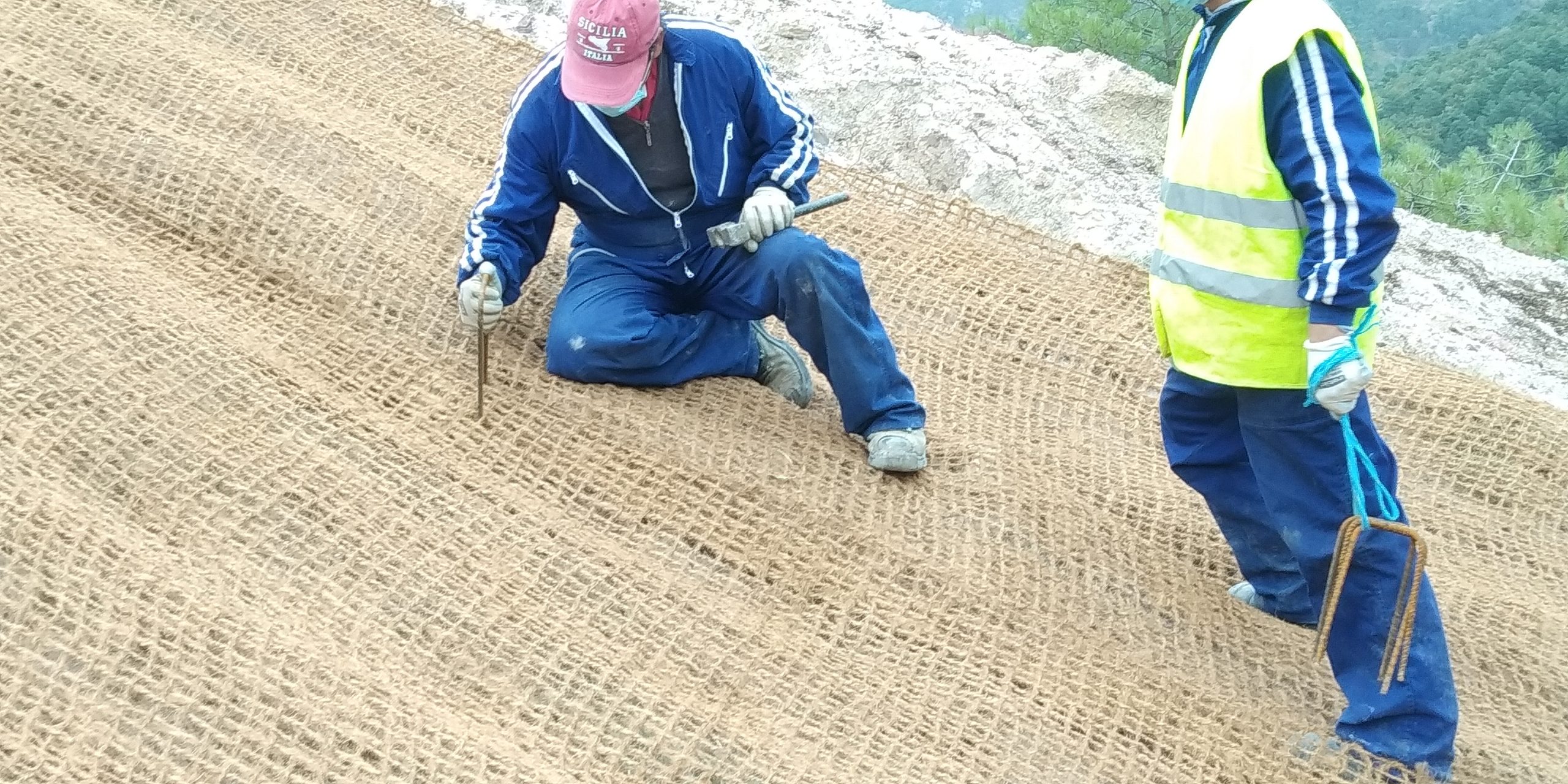 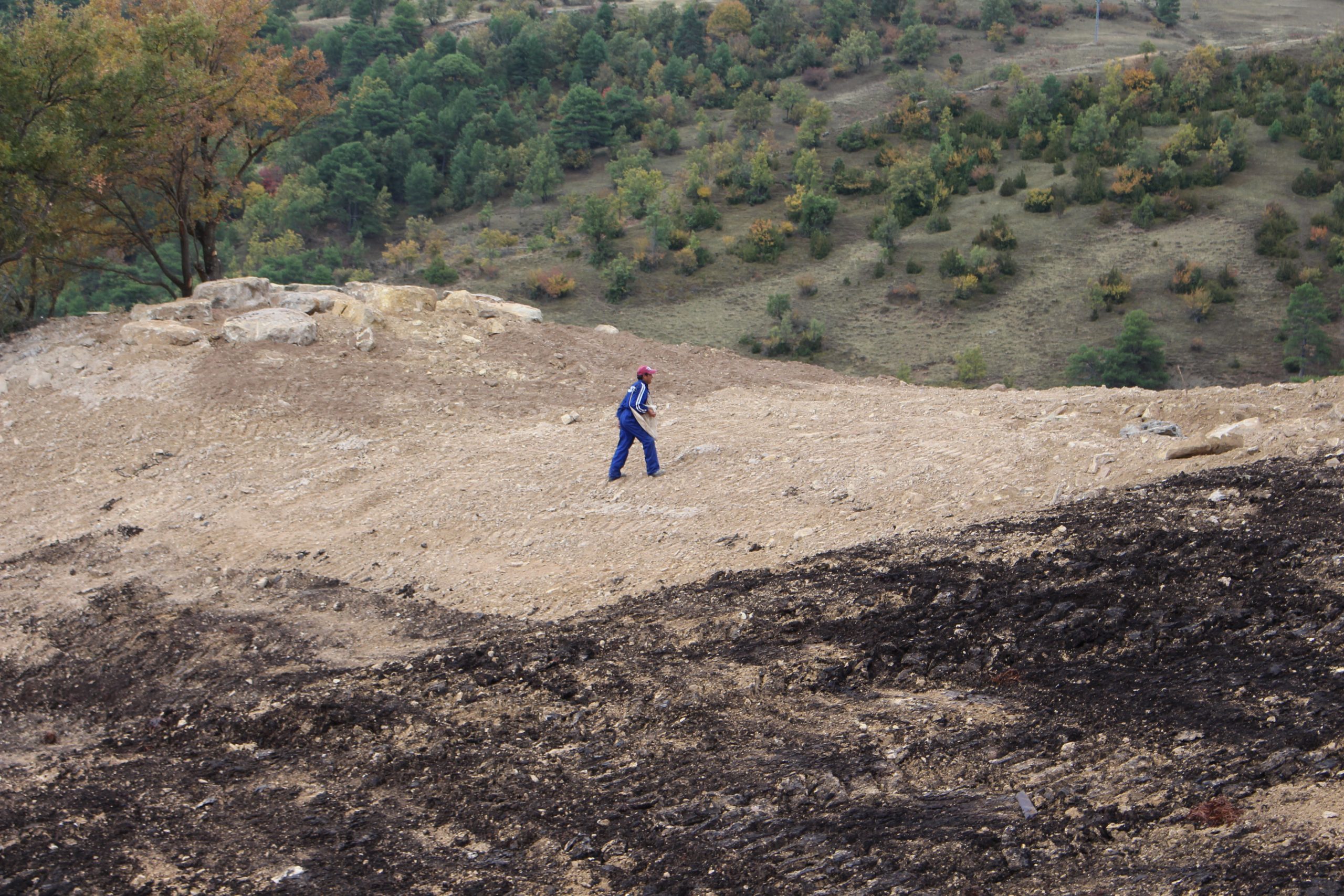 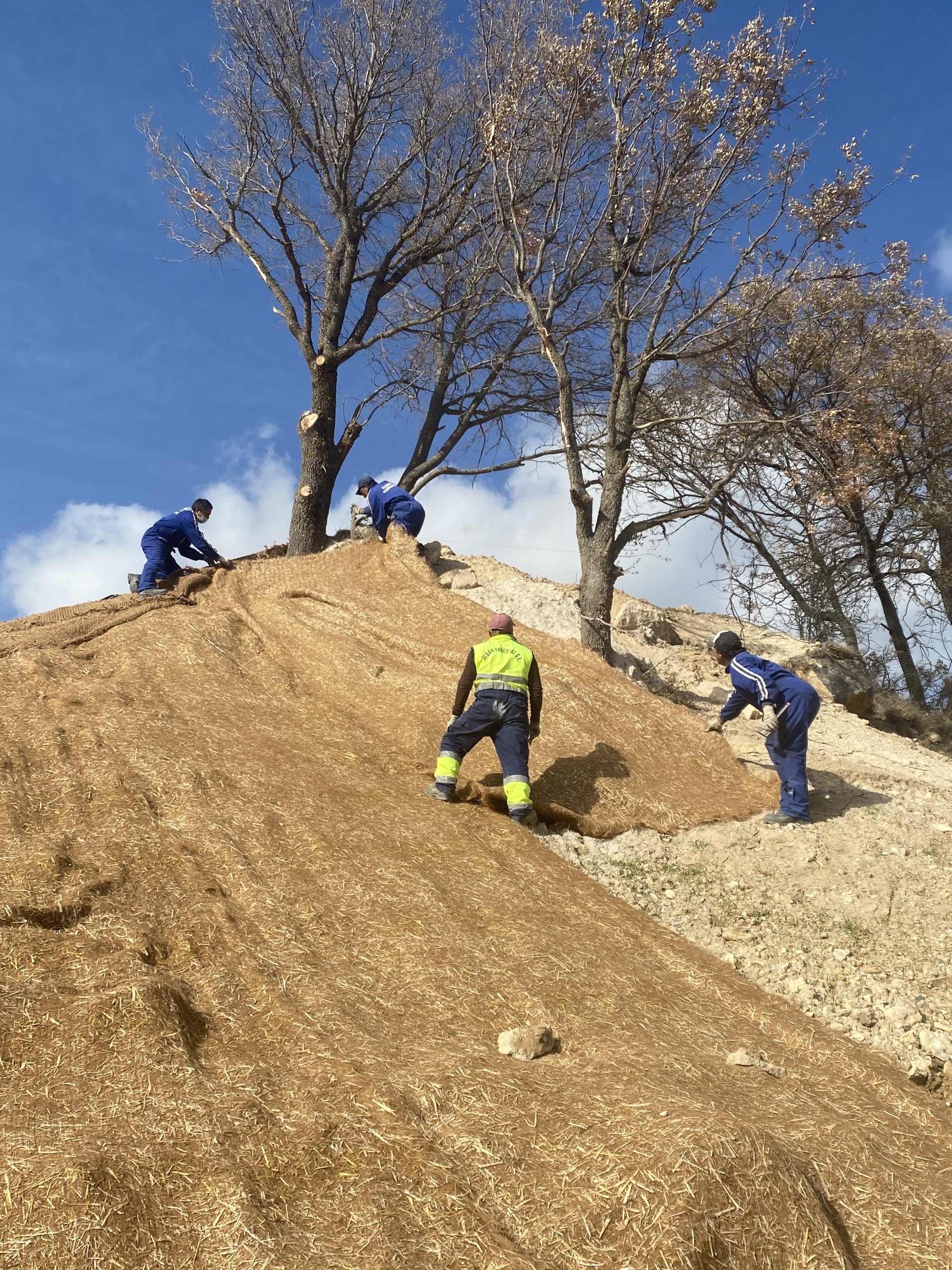 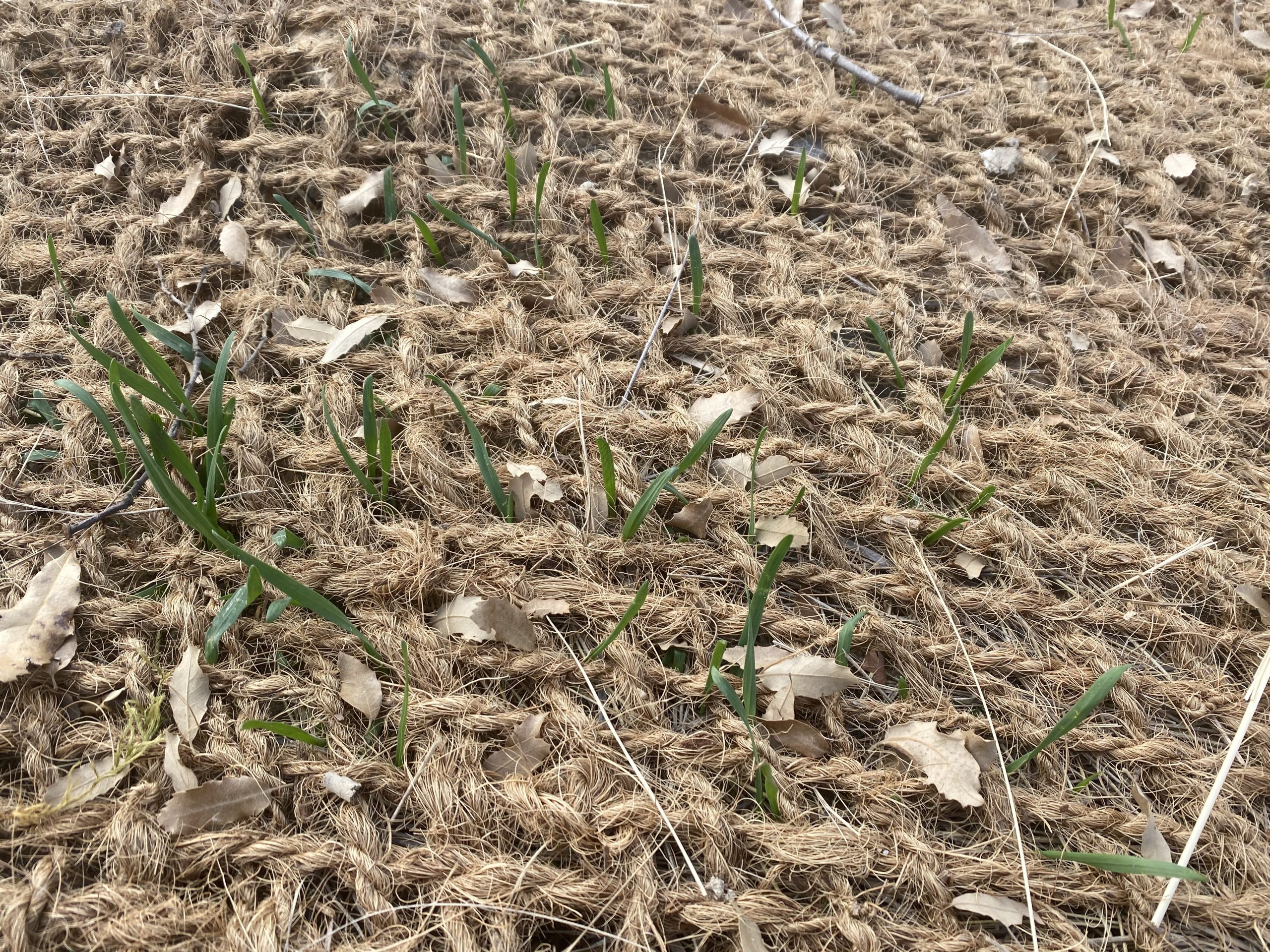